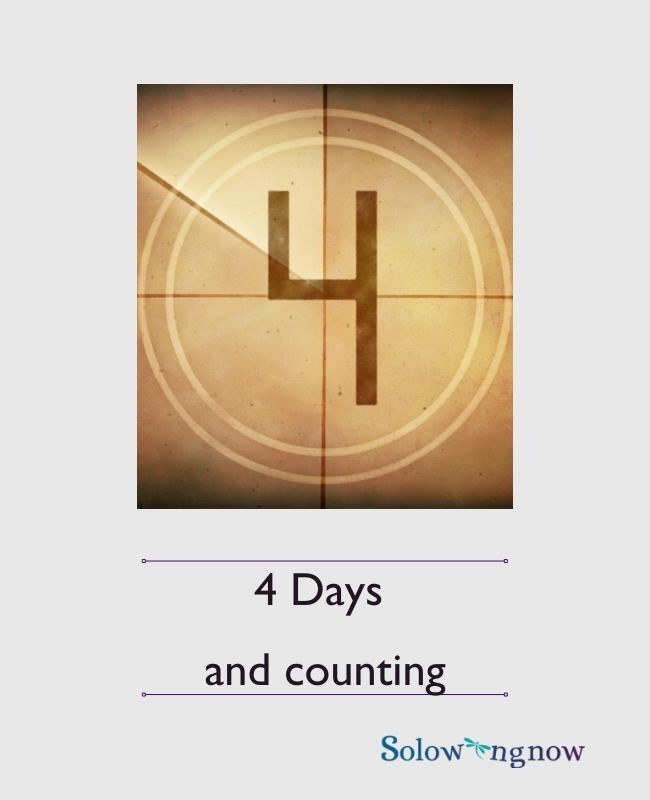 It’s hard to believe that in 4 more days, my sabbatical will be officially over…according to me.  And since it is my sabbatical, I get to decide!

What this means is that I will now discipline myself to get up every day and go to my home office and “work.”  I have plenty to do in terms of writing, developing content for my new business, building a client base and marketing my services, and all the other and sundry things that support a business.  And I’m ready to do that.

What it doesn’t mean is that I will go out and get a “real job” now. My income won’t change…yet…so I will still subsidize my spending from what’s left of my savings.  Being frugal on the home front isn’t so bad after all. I have actually considered a seasonal retail job, but I do also have plans with the kids for Christmas, so that might be a problem. And I’m not the kind of person who could start a job without making a commitment to give it a good faith go for the long term. So until I have to, I’m not going to consider that route.

When I started this sabbatical, I gave myself some rules, which were based on my own definition of what a (self-sponsored) sabbatical is.  First and foremost, it was to be a time of rest and recovery so I could process my grief in a way that was productive for me. I didn’t know exactly what that would be, but I deal with things on an active level, so this time off wasn’t intended to just be a long nap.  In fact, my rules were basically to get out of bed every day and make the bed so I wouldn’t be tempted to get back in, get dressed before noon each day, and get out of the house in some quasi-social way to be around other people at least once a week.  I’m proud to say I was successful in that.

I also considered my sabbatical to be a time of growth and opportunity, and I pursued that through reading and travel.  It turned out that I also have done quite a bit of formal “learning” through attending workshops, information sessions, and conferences. I studied not only grief and grieving, change and transition, and writing, but I also enrolled in a Speaker Academy and worked on developing my skills as a solopreneur in the business of speaking to make money. My former employer’s request for me to teach some classes became an earlier-than-expected return to the working world, but it has given me a head-start on my Next Big Thing which it turns out is speaking, teaching, coaching, and consulting.  All things considered, the purpose of my sabbatical has also been fulfilled.

The primary goal I had, though, was to sort out all the feelings I had over Kevin’s passing and to discover and get comfortable with Solowingnow, not as a hobby or business endeavor, but as a way of life.  I’m still not a fan of the word “widow,” and I still don’t consider myself “single.”  I am on my own in a mix of those two worlds, but even if I were to engage in a new romantic relationship, being in this space will have its mark on my identity.

The other day a new friend since I’ve moved to Williamsburg commented to me that she hadn’t known this version of me and liked the changes she was seeing, that I smile a lot more these days, and I am optimistic and positive.  A friend who has known me a very long time also said that she noticed I seem to be the “old Pat” again.  No better testimonial than those as to my acceptance of my new life.  Of course, this assumes I was happy with the “old Pat,” which I am, although it’s also fair to say I am still moving forward and prefer the “new old Pat.”

Making the shift now from Sabbatical As A Time For Me to working from home will require some new rules. After all, one of my goals now is to make enough money to support me and my business, which will mean consistently making sales, creating a support team, and putting some systems in place.  I have devised a “3-month hustle” plan to get me out of the starting block. And I will refine my 1, 2, and 3-year plans as I get those business formalities in place and the foundation solidified. New rules include having a work schedule, following a plan for when I will do the tasks of running a business (such as admin work on Monday and Friday afternoons, 1-a-day marketing, networking at least twice a week, for now, reading/learning on Wednesdays, appointment/call days, etc.).

I am also going to shift away from personal email and Facebook during my prime working hours (which may well include hours after 5 pm since I find evening work time to be more productive for me than early mornings), using my business email address more consistently, changing my voice mail on the phone to reflect it is a business people have reached, and answering it with professional greeting instead of just “hello.”  And I will track where I spend my time (or not) so I can continue to make progress toward the lifestyle I desire.  After all, if it turns out that I don’t spend any time caring for myself, or doing the things I say I want to do, then my lifestyle will not be reflective of how I envision it being. Who wants that? Been there, done that.

This sabbatical year also has been a time for shaking off the intense work structure I had adopted, and while I haven’t been exactly loosey-goosey lately, I have been very flexible with how and when I do things. This includes when I eat breakfast when I get groceries when I do housework, how long my lunch hour is, when I sit at my desk, how many times I walk around the neighborhood, and where I go on spontaneous road trips.  Now I have to get back into a routine because I know that will serve me and my business goals, but I will be alert to how it impacts my Self and my life. No longer am I aiming for balance, which implies equal time for work and non-work. Now I am after integration of my personal and professional personas, with a lifestyle (including work and how I contribute to my world) that is of my choosing and my making.

I am Solowingnow and more than content with that….more than accepting….certainly not settling.  I am embracing, I am flying, I am feeling momentum build. I feel strong again, I feel prepared, I feel grateful for having been able to live this sabbatical year on my terms. It’s great to be me again, and I’m looking forward to the next best version of me, too.