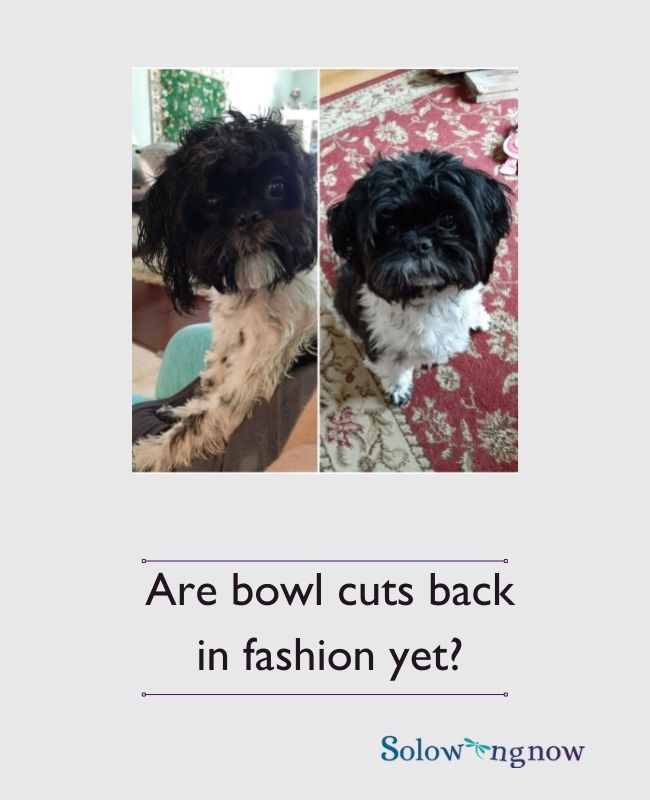 A funny thing happened on the way to … well, it sort of isn’t funny, at least not if you are the dog, but it is kind of funny if you’re me. Once you stop making it worse. It continues to be hot and very humid here in Virginia, and my one-year-old Shih Tzu, Rocco, needs regular grooming to keep his hair matting under control and to survive the heat. I’ not just talking combing or brushing. I mean The Works! I am not willing to pay $80 to have him professionally groomed every month ever since I had a bad experience taking Harley and Sasha to a groomer. Three years ago and I still grit my teeth when I think of it. That woman complained that Sasha wouldn’t sit still for her, which I do not doubt, but I had told her when I took her in that she was a rescue and didn’t seem to like being touched on her feet or around her neck. “No problem. I can handle it. This is what I do.” Yep, sure. Long story short, she gave both of them uneven, chunky haircuts, and I went out and bought my own clippers because I was sure I could do better. And I did…I do. Mostly. So it rained yesterday, a lot, meaning the ground was soft and wet. From one day to the next Rocco can develop mats, which neither he nor I am fans of trying to comb out. And when he is wet, it’s worse. It’s necessary to trim the between the pads as well as the top of the paws. The regular hair clippers are too large to do small feet nicely, plus the cord tends to get in the way of trying to manipulate the feet of a dancing pup. This means I also recently purchased a battery-operated, palm-sized clipper just for these small jobs. And now Rocco has lost his little goatee because he just had to look down and sniff and smell and lick my hand to get at the new clippers when I was trying to shave the pads of his paws. Those little clippers are fast and sharp! He kind of looks like he has lost his chin now and the straggly neck hairs I couldn’t get earlier are still there because I’m now afraid to get too close to the rest of his head. That one ear doesn’t look too bad, does it? This is another one of those times when the reality of Solowingnow hits home. Some things are just hard to do by yourself. Like, hold a dog with four legs when you only have two arms and a buzzing chainsaw in your hand. Or soothe a scared puppy who doesn’t like the new noises. Or hold one paw to file down the long, pointy, black toenails. What I need is a tranquilizer gun, I think, but what I bought was one of those arm things to clip them to on the edge of the counter, to hold them in place theoretically, and to keep them from plopping down. That was a waste of nearly a hundred dollars. I bought a couple of those sticky mats you swipe peanut butter on to distract a hungry dog (and yes, they are always hungry). That works great for a bath, but not when you need their head to stay upward, away from the counter and their feet. I hope it’s just that I haven’t found the right thing to stick them to yet, though. I’ve seen people who tape them to their own foreheads but I’m not there yet. Not sure how I could see the paw if a tongue was smearing my glasses. I finally gave up on trying to clip his nails, which I can do okay usually with a Dremel sanding thing, but it’s those dewclaws, the little nails hiding on the inside of the leg and that grow around and turn back in on themselves. Trust me, it’s just as easy to snarl or nick their hair as a file of the nail tip. So I figure if I’m gonna pay $10 for just a nail clipping, I might as well let her do all of the nails and not just those dews. Tonight it’s all for one and one for all! Three dogs get to go to Clip It Up at 5:45. I don’t think she’ll actually say anything about Rocco’s face an uneven trim, but she might remind me in case I forgot from last time that she only charges $60-80 for full grooming, including ears, eyes, anal glands, and nails in addition to the regular spa bath. (And yes, it’s a different groomer from the crapulous haircut giver.) Thank God I still have the sense to not cut my own hair. So far.