This is a post about feelings and trusting my intuition. I give a few examples of not listening to myself, both in a personal situation with dog grooming yesterday and a business experience that still isn’t totally resolved. It all has a happy ending, though! 😉

I’m sitting here trying to type in that hunt-and-peck way, with one hand, and mostly one finger.  Sasha is on my lap and just does not want to get off of me. Yesterday was a bit traumatic for her…and me, too. It was grooming day for her and Harley. She has been quite needy since I picked her up from the groomer. Harley did just fine and has remained his usual self. But that cut is horrible. There is no other good way to say it.  And unfortunately, that goes for both of them.  The good news is that it has been a learning experience for me. I not only immediately started to trust my own non-tested clipping skills, but I know that I have grown and refined my ways of handling stress in a more productive way lately, which I am proud of.

I have combed Sasha almost every single night since I got her.  I have bathed her, cleaned her ears, clipped her nails. The vet clipped a few nails also when I took her in for shots 2 weeks ago. I have scissors-trimmed her eyes and tail area. It was the back and tummy I was worried about cutting or shaving, so I didn’t.  Harley has long, silky, thin (sparse) hair, so I guessed a clipper was not the way to go with him, but scissors on his skinny legs intimidated me. I scoured Pinterest for pictures of cute Yorkie cuts and made up my mind what I wanted.  I thought the groomer could do that better than I could myself, but Geez-Louise, uneven, choppy cuts must be her specialty. Poor Harley; it will grow back, I promise! 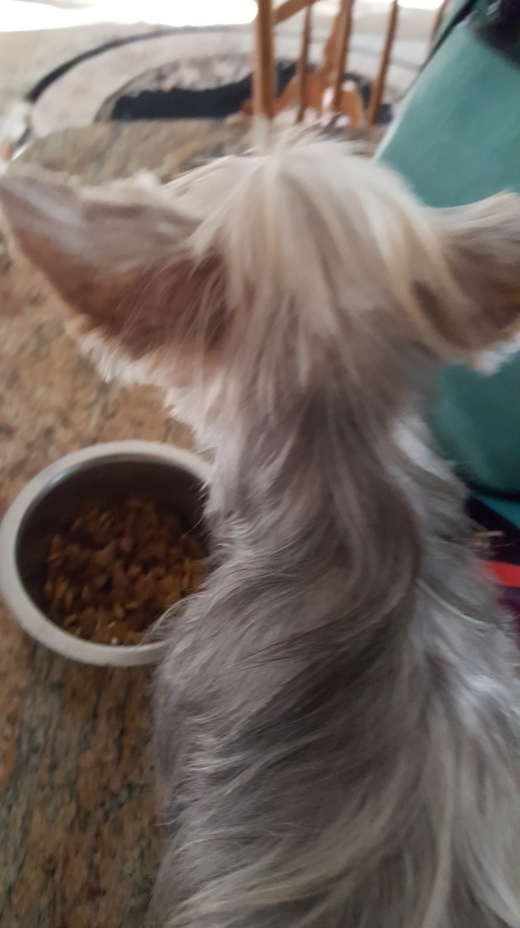 Harley behaved just fine for the groomer, but Sasha apparently did not like her. Truth be told, neither did I – like her, I mean. I should have trusted myself more. It’s highly unusual for me to make a snap judgment, but I had a feeling when I first talked to her on the phone, which became stronger when I met her yesterday and was solidified when she called me to pick them up. This must be my intuition at work, and I suppose I deserve what I got for not listening to it. It’s not fair to the dogs, though. Good thing they don’t have mirrors in their kennels!

Now, to be fair, when I got Sasha, I was told to expect possessive behavior from her, especially related to her toys. That has not been my experience with her at all. Not with me, Bo, Harley, or my friend Jackie and her dogs, or the neighbors we meet on the street. Once when she escaped my fenced back, she was easily picked up and brought home without incident. So for the groomer to tell me a story of a somewhat mean dog who tried to bite her, well, I was very surprised.  Don’t worry, Sasha; Mama will figure out a way to clean it up for you. 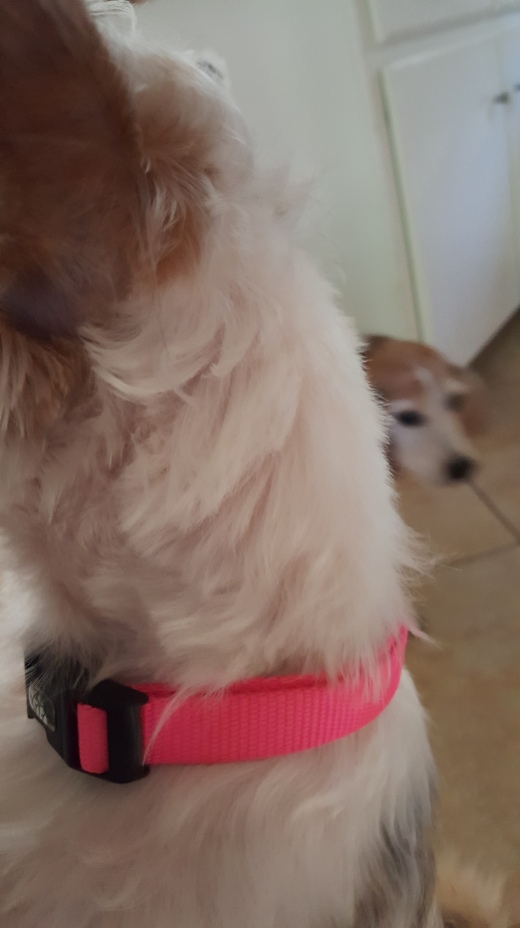 So back to my intuition. I heard it said a long time ago (I think it was Wayne Dyer, the motivational speaker) that prayer is you talking to God, and intuition is God talking to you. I have always wanted the messages to be crystal clear – like a true “calling,” as when the phone rings and there is a definite voice to be heard! But now I am finally recognizing my intuition for what it is, those sixth-sense feelings. Too bad it’s in retrospect, but I’m learning.

A similar thing happened to me in a quasi-work scenario recently. I volunteer for a local non-profit, membership-based organization. I have heard stories of the “leaders,” which I have discounted as gossip because that hasn’t been my own experience. But again, I ignored my intuition when I got a sour taste about a process being used for converting to a new way of doing business. I thought I could rise above the grumbling and do my own thing my way. Once, and I chalked it up to his having a bad day. The second time, I felt disrespected and said so. The response was that I was “curt” and should have tried harder. The third time, I was downright offended so called him on it and reported it. The response was I was being a tattle-tale! Do you believe this?!? Are we in junior high school??? But then, it still wasn’t over. Now the “leader” called to chew me out for “not staying in my lane.” Never mind that I had double-checked, and I did exactly what I was supposed to do, so clearly she was trying to cover her tracks.  I started to get defensive, and anger kicked in, and then I almost gave it up for a minute. This was the apparent culture of the organization, and we all know how hard it is to change the culture. But just because it’s hard doesn’t mean it’s impossible.  I reminded myself that I was entitled to have my feelings (something I have learned through my grief process) and to express those feelings (something else I learned in my grief). And I also reminded myself that I have a lot of proven experience in turning around a bad situation.

One of my business philosophies is this: There is no such thing as bad leadership. If it’s bad, it’s not leadership. Now I have finished this statement: It’s bad actors. Yes, I was dealing with a handful of bad actors, and I did not want to be in business with them. So I firmly told the director that I was not going to attend a meeting I was scheduled for. She hung up on me (proof of bad actor, right?).  I was then overwhelmed with all kinds of feelings (disbelief, disappointment, frustration, anger, self-doubt). So I did what any self-respecting woman would do; I vented to two other women, both of whom I highly respect and who know all the actors involved, good and bad. I wanted perspective in case I was being blind to my own piece of this bad-getting-worse situation. (They sided with me, in case you’re wondering.) (And yes, I also went shopping and got a really cute tea table for only $27!)

So in the midst of this, I thought about resigning entirely. But I have another philosophy that came into play here. This comes from Neale Donald Walsh, author of the Conversations with God series of books. He says The only reason to do anything is as an expression of who you are. I believe in the organization and am committed to its purpose. I believe in the project I am working on. The person who would be hurt if I walked away would be me. Who I am  (who I want to be known as) is a dedicated, honest person contributing to the improvement of communication and leadership in the world. This means I potentially have an opportunity to help the bad actor(s) improve as well. So I decided to wait it out a little longer.

Early the next morning,  the main bad actor called me with an apology. Which she, unfortunately, messed up with excuses. But at least she was trying, somehow, in her way. I felt a little vindicated, and I also felt sorry for her, wondering if I had ever done the same when I didn’t know better (and asking the Universe for forgiveness because it’s probable I have). I thanked her for calling, although I did not offer to rescind my objection and attend the meeting, which made me feel proud of myself. (You can teach someone how to treat you, and you can also teach them how not to treat you.)

I felt a bit hesitant, but I offered a healing balm, in the hopes that I could help her. I suggested she was trying to do too much herself, which was stressing her out, and that over-managing or trying to control this issue was something she would better off delegating. This way she wasn’t running herself ragged, and she could teach the others who had their fingers in this mess, a better way. She didn’t immediately accept that notion, but a half-hour later, I got an email from someone else asking for a conference call to discuss this issue. At that point, my feelings were calm again, no longer unsettled and tense. How this plays out completely is yet to be seen.

When all is said and done…

It’s been crazy to feel so many feelings lately. A friend said it was due to a strong geomagnetic storm among the planets that has my energy scattered, which it may be. That doesn’t explain the lopsided look of my poor dogs, but by tomorrow, these stars should be back in alignment, and then I may attempt a corrective trim myself. How much worse could it get, right?

Feeling my feelings, letting them surface instead of trying to stuff them, acknowledging them, and airing them out, has been healing. I get stronger when I release them and make room for more sunshine and rainbows and doggie cuddles. I just hope it doesn’t take me as long to edit this post as it did to type it! Sasha is still comfy in my lap.