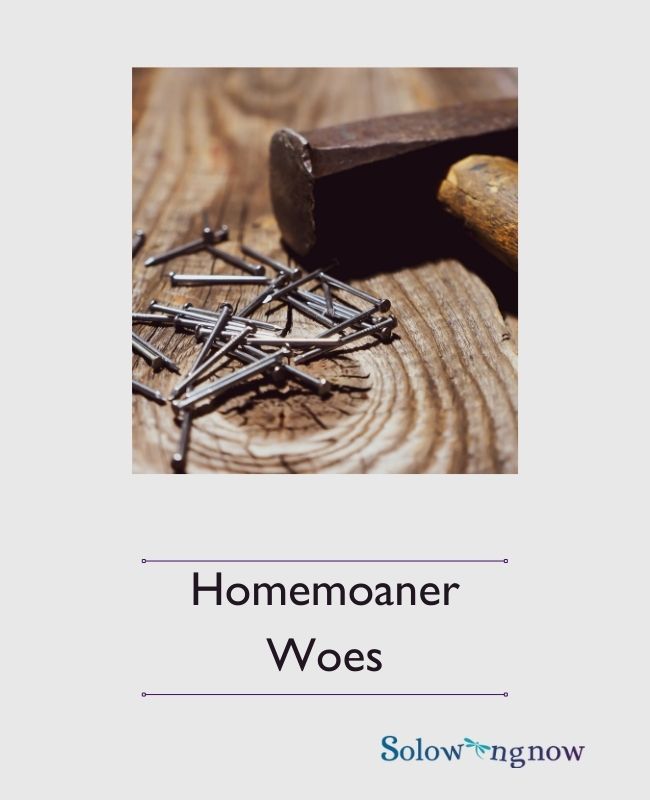 How many times have you moved in your life? Are you (or have you been) an apartment dweller, i.e., where someone else has to manage the maintenance of your place? How long have you lived in your current place? Since I left my childhood home, which was the summer after I graduated high school, I have had 13 different addresses, with only transitional rental places. Otherwise, I have been the homeowner (well, me and the banks). The longest I have stayed in any one zip code was my hometown, which I left at age 18, although we moved around town a lot until I was 9 years old, and then we stayed in that house the longest – 9 years, but my mom stayed put for 35 years. I do not remember any major home repairs by her, and I have always somehow avoided big-ticket repairs. Of course, I have voluntarily taken on projects, like converting a garage to a family room; adding a deck, pergola, and fence; upgrading all the appliances; even replacing carpeting with hardwood floors. But I know if I have to, I can, even if I don’t want to. You see, I have recovered from a big 500-year flood, so there’s that, I guess. I had to have the entire lower level of my house gutted and rebuilt in 1997. Now my number is up again. I have made my way to the head of the line, changing from proud Homeowner to sad Homemoaner. Here’s what happened. A black, sort of fuzzy and bumpy-lumpy spot on my garage ceiling caught my eye.

I am certain I had not seen it before that moment; it was hard to miss, as it was nearly directly across and up from the stairs I was going down. We had been having a LOT of rain – several inches per day for a few days in a row – and three of my neighbors had had their roofs replaced in the past few months. My immediate thought was that I had a roof leak. Oh, gosh! I was thinking I had a $10,000+ spot on my ceiling. In fact, I recently had asked the neighbors’ roofer to give me an estimate to reshingle my 20-year-old roof so I could be prepared whenever I had to shell out that kind of money but had not yet received the estimate. I contacted the roofer and told him of my black spot problem. He didn’t seem overly concerned; it took him almost a week to fit me into his schedule to come to look at it. While waiting, I contacted another roofer also, who also couldn’t come for about a week. Both of them agreed, though, that I did NOT have a roof leak. Relief! I just saved $10,000!! Except they both agreed I had a problem in my bathroom, probably a drain issue, which turned out to be in the vicinity of the black spot. So maybe only one of those thousand$. I could manage.

I called a plumber, who took another week to get here. He took one look at the shower and said I did not have a drain problem. He thought I had a crack in my shower floor, which he could not fix. But he did cut a hole in the garage ceiling to remove the creepy black spot and confirm it was not the drain. And to tell me my bathroom subfloor was wet, and the black spot was mold due to wet insulation and sheetrock.

Once we removed some of the wet gunk, his assistant turned the shower on, and it rained inside my garage, enough that I needed a bucket to catch the water coming down. He said I needed a tile guy and maybe a contractor. At that point, I was wishing I only had a roof leak.

So I did what any solo homeowner does. I called my son, who does custom shower work 2000 miles away, and my brother who has done extensive remodeling work on his own home and outbuildings. Pictures were zapped across the ‘net. My son said it definitely sounds like the shower pan. My brother said it sounded like a water pipe break between the shower faucet and showerhead. Neither was good news.

Next up was plumber #2, who confirmed the first plumber’s assessment, but told me he couldn’t be sure until the tile shower floor was ripped up and maybe part of the wall.

He thought I likely had mold behind the tiles in my shower, too. He also said I did not need a tile guy; I needed a contractor AND a plumber. The contractor could do the demolition and the tile work, and the plumber would then do the pipe and drain work. Cha-ching! went my brain.

What would be your next step? Mine was to cry. I’m getting good at expressing myself this way. Then I called one of my sisters, the one who just went through a year of rebuilding her home after a fire. We commiserated and talked about pumpkin spice everything and holiday decorating. Once I was calm again, I moved on to surfing Pinterest for ideas for my dream spa-like bathroom. But then the financial reality crept back in. So I cried some more, upset in part that I had to go through this myself. While the idea of swinging a sledgehammer and busting up tile has a certain appeal, carrying out debris in a 5-gallon bucket down a flight of stairs … not so much. I realized quickly, though, that I wasn’t going through this alone. I had my son, my siblings, friends, and the plumber, and the contractor. Revived, I moved on. Don’t count me out yet! My next stop was my homeowner’s insurance agent, who referred me to the company claims department, which needs the assessment and estimate from the plumber and the contractor to get this going. Uff-da! I’m getting better at waiting. The good news is that I have another bathroom to use for the next couple of months since the holidays are coming up and it is likely they can’t get me on their schedules until the beginning of the new year. Once they start, it should be done in less than 2 weeks, if the two of them can coordinate their respective work. That gives me time to define what I want. The better news is that Pinterest really does have some fab ideas. Who knew grab bars for us safety-minded, mature folks could be artful as well as functional? And that glass blocks are still in fashion? That tile workers aren’t limited to straight lines and grids? I’m just getting started. The beauty in this (once I let myself go) is that I do not need to compromise on style or color, or anything. I can do it my way. Well, mine and the contractor’s way, I suppose. And the bank. Because it’s likely that even if the insurance pays out a claim on this, it won’t pay for upgrades and a little zip or zing I’m likely going to want. I’m done with home moaning for now…. mostly because I won’t even have the contractor estimate for a few more days probably. Sticker shock has had no effect on me today. This means I am going to start looking at websites other than Pinterest and price out my wish list. Back to homeowning pride.