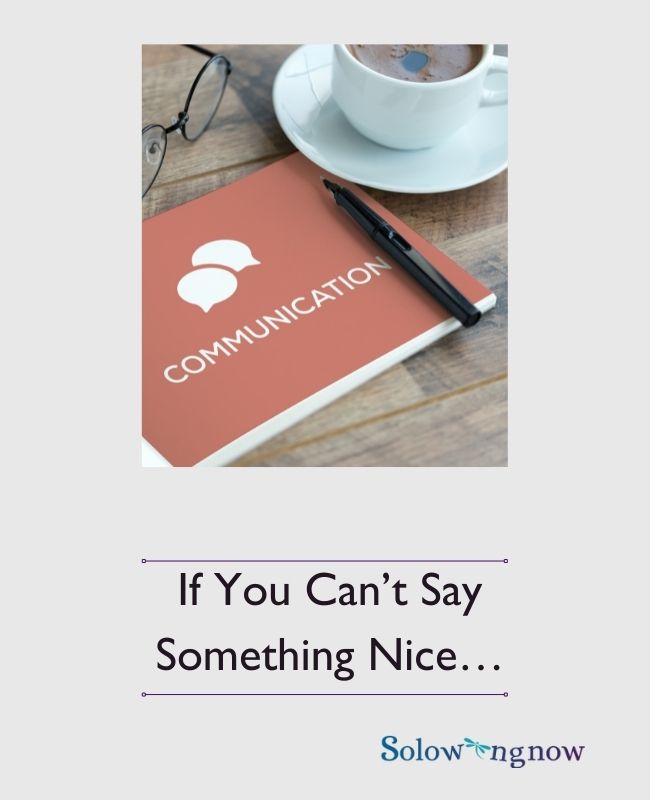 Are you one of those people who only think of the right thing to say, or at least something to say after the fact, when the conversation is over and you’ve either moved on to another topic or you’re retelling the story to yourself or others? Or maybe you stop yourself from saying what you were thinking because you took the High Road, or you knew it wasn’t a finished thought yet? Maybe you didn’t say something because you knew you couldn’t convince the other person so you let the moment go by. A good Catholic upbringing, complete with schooling by nuns wearing the floor-length black tunic, scapular, and habit during my formative years, then a brief stint in the US Army, followed by a career in the apolitical, neutral judicial system conditioned me well to hold my tongue. I learned “if you can’t say something nice, don’t say anything at all.” I learned that you can’t win a rational argument against an irrational person. I learned that one doesn’t always have all the facts or know what you know. And I learned (from The Gambler song) that sometimes you have to fight. This week I chose to fight back, and it didn’t end all that well, unfortunately. I didn’t lose, but I did give up, for now, because I could see that the argument was going nowhere fast. I also didn’t feel great about the exchange; I was empowered for just a minute but that faded quickly. However, three days later, it still bugs the You-Know-What out of me, so I guess it is unfinished business I need to deal with … for my own sake, not his. Here’s my version of what happened; although I relied on a few screenshots, it’s likely there is some interpretation by me as to what was said or meant. I believe in transparency and open channels of communication, especially in government, or in this case, a governing body. I have been told that I shouldn’t always give people so much information, but I think that people should get to choose what they do with the information, that my withholding it serves no purpose. So as the president of my homeowners’ association, I posted a status report regarding pool usage that I thought would be useful and welcomed by residents of my community. There is some backstory that I won’t get into all the details of here, but it might help you to understand that we have a community swimming pool that was formerly used by both our HOA kids’ swim team and was also made available to a larger more metropolitan or community (area) competitive swim team. Our pool is typically open in June, July, and August, but because of the other swim team’s use, it was heated and available year-round to them but not to our own families. That arrangement ended about three years ago. It might also be useful for you to know that I am serving my third year of a three-year term on the Board, all as president. And that we, like everyone else in the country, are suffering through the COVID-19 pandemic, meaning that we are under restrictions put in place by the governor and our pool has not yet opened for the 2020 summer season a month after Memorial Day Weekend. We plan to open on the 4th of July, three days after we are allowed to do so, but still with some restrictions in place for physical distancing, sanitization, and screening for symptoms. (See how I tend to explain myself even when I don’t have to???) So a few days ago I posted that our neighborhood swim team was beginning practice, in compliance with the Governor’s orders and guidance on how to make that happen. And then I added that we hoped to open the pool to everyone else when the Governor authorized it, but that we would need volunteers to make this happen. So much for my good intentions. Within about three minutes a man commented that we shouldn’t need volunteers, that that was what our HOA dues were for, that we should hire someone instead, that I had dropped the ball, that I was depriving families of the use of the pool which wasn’t fair since the swim team was going to use the pool. And then, after a barrage of questions, he said “this is a complete disgrace and you should be ashamed of how you handled this.” Up until that last line, I was prepared to answer the questions included in his diatribe. But I guess my Better Angels were on break just then. When I read that last line, I couldn’t take it anymore. Never mind I had Covid Fatigue, I also had years of not saying what I think, of not defending myself publicly, of always trying to be politically correct and diplomatic. I finally reached a tipping point. I should be ashamed?!?? I started off by explaining as best I could how our HOA dues are among the lowest in town, and of his $38.83/month payment, only $5.69/month went toward pool expenses, how else the dues are prioritized in the budget, that the delay in opening was caused by the pandemic and not an arbitrary board decision, that we were doing the best we could. And then… then I got real. Here is exactly what I said next:

But if you still think your Board isn’t doing it’s job, then please show up at one of our meetings, or better yet, apply for a Board position. We will have 2 openings for 2021. It’s only a 3-year commitment for which you get paid $0 and get harassed by dissatisfied residents. PS-we have been asking for volunteers for several weeks already. Planning is hard to do when you have no one to carry out the job. Why don’t you pick up that ball that you think got dropped? My name is Pat Duggan. I am the president this year. If you want to talk more about who should be ashamed, give me a call.