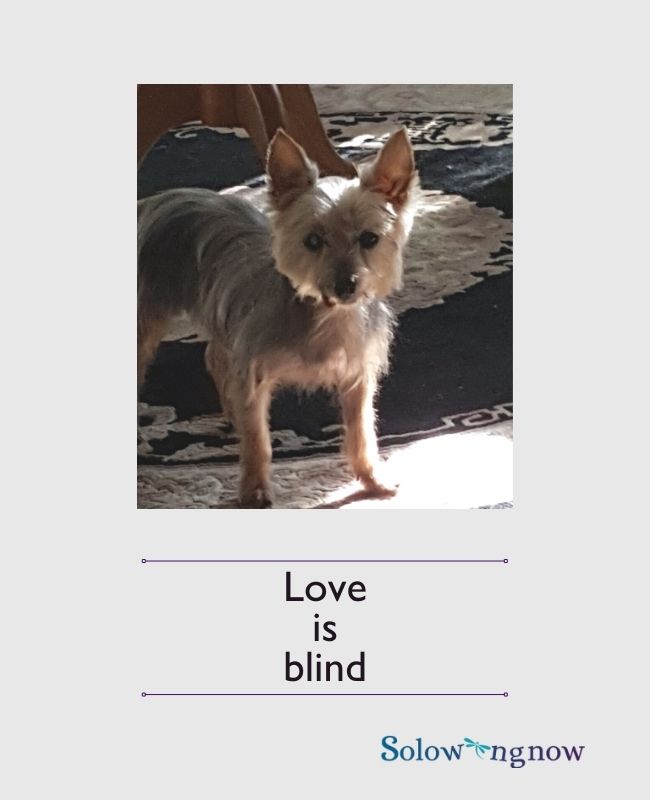 My fur baby Harley is around 12 years old. I adopted him as a rescue 3 months ago.

He has no teeth, and was undernourished. He suffered from some stress, too, as evidenced by his lackluster and very thin coat of fur. Most problematic was the vet’s diagnosis that he was nearly blind, due to cataracts. I didn’t think it could be as bad as she suggested because he seemed fearless, jumping up onto my lap, hopping down off furniture, taking stairs without hesitation. There was the occasional drift to the side when we walked around the neighborhood, and once in a while, he turned a corner too short and bumped into a wall. I loved him anyway and was blind to the issue.

But it was happening a little more often lately. And then this morning, I had all the proof I needed. We were leaving the bedroom and heading downstairs. He was right behind me, as usual, or so I thought. I happened to glance to my right when I saw a movement out of the corner of my eye.

Oh My God!! Harley had walked over to the banister that overlooks the entryway foyer. It’s got to be about 10′ down. He thought it was the steps, I guess. He is pretty small at about 5#. He had his head and shoulder through the spindles and was ready to put his paw down on the first stair – which wasn’t there – so he would have flown instead of walked.

I screamed and lunged, and by the grace of God, I grabbed his back legs. He was ready to fly when I swooped him up into my arms and nearly suffocated him. He was shaking and so was I. He didn’t cry but I sure did.

An hour later I had measured the banisters, put dogs in crates, and took off on a mission. It felt good to have a strong purpose, even given the circumstances. I went to Habitat ReStore, but no chic ideas came to me. Ace Hardware had lumber but

that was not what I wanted. Danny’s Glass wanted almost $80 for one piece of Plexiglass, and I needed two.  Home Depot had options! There was a young man named Mike who was more than happy to cut a stock piece of thin clear plastic (whatever version of Plexi they carry) for me. When I got home, I gave quick thanks to the Angels in the Hardware Department of Heaven and drilled holes in the plastic sheeting without cracking it. I fastened it to the spindles with zip ties, and Voila! I have a solution to the dog-through-the-railing problem.

Then I rearranged the three baby gates and

the aluminum shelf I use as a barrier to the stairwell, top AND bottom now. It would be nice if they had doors so I wouldn’t have to step over … since I took a fall a few weeks ago when I misjudged the height of one of them. Yes, I know I could buy the door kind but let’s say it’s not a priority. I’d prefer to think I’m young enough and agile enough that this is not a necessity…yet.

Now that I am calmed down (meaning I ate healing cookies and cinnamon rolls), I also have Googled how to care for a blind dog. Step 1 is to admit there is a problem. (Sound familiar?)  The vet says it’s cataracts, which may be surgically corrected or at least improved, but $2500 and no guarantee. Step 2 is to help him  use his  other senses, like smell and sound and touch. It’s unlikely I’m going to put bells on my shoes or the other dogs so he can find us, but I will talk to him more.

In fact, there are a series of things to do, some of which will be easier to implement than others. For example, I like to rearrange my furniture, but the advice is to leave it be so that the dog can learn his patterns. Use textured rugs to alert the dog to doors and stairs. Put scented oils on the rug under his food bowl and on his bed so he can find them easier. These are some of the to-do things.

Then there are the don’t-do things. He is so tiny that I love to scoop him up and cuddle him. But since he can’t see me or maybe always hear me, I need to be careful to not startle him. And carrying him from place to place is also a no-no, since he can become disoriented if he doesn’t recognize where I’ve put him down.

What it means is that we both have to adapt. Which is so obvious. I can’t believe I have never thought of me having to do the adjusting. How selfish is that of me?  I have never had to accommodate anyone (or anything) like this.  There was the time my son broke his knee and was on crutches and in a brace, but all I had to do really was to pick UP the throw rugs on the floor so he wouldn’t trip. He was the one who had to manage getting around. Am I a bad mama?

I’ve been blind about a few things apparently. I have a new appreciation for those with limited or no sight and how they adapt. I also have a new respect for those who live with or care for the blind or deaf. It may or may not be a hardship but it certainly takes compassion and selflessness.

I am going to be grateful that all I had was a close call today, one that could be fixed easily enough. I will be better prepared if ever I have the chance to help someone who has found themselves in need of help or understanding.  There are all kinds of blindness, and it’s up to me to figure them out and overcome or adjust to my own.

In the meantime, it’s probably safe to put the dog down now. It’s kind of hard to type with him on my lap and his paws tapping the wrong keys occasionally.  I will go read more on taking care of my nearly-blind dog. And if you see me in the store and I’ve forgotten to take off one of the bells on my shoe, just quietly point it out so I can stop jingling around.