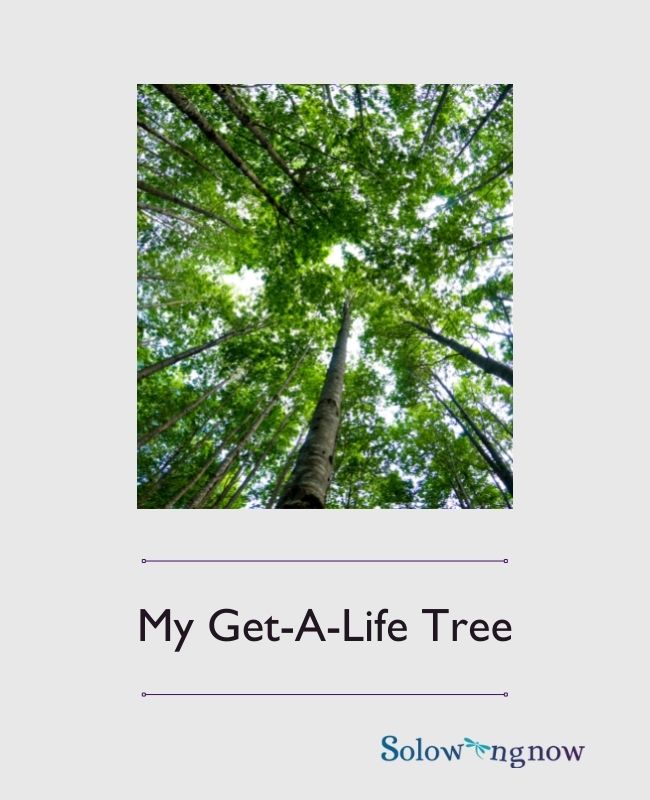 Last year, when I was really stuck in my grief, I kept trying to “see” my way out of the sad,  dark hole I knew I was dangerously close to.  I’ve always been a fan of Vision Boards and I tried to use that as a way to keep the last flicker of hope alight. I tried reading messages of hope by others, but that didn’t work either. I tried making small goals and updated my Bucket List. What I discovered somewhere along the way was that I needed to stop trying to live in the future, and to just enjoy today. After all, “we know not the hour,” as the saying goes. Tomorrow is not guaranteed, as I learned first-hand.

My thinking kept coming back to the idea that I had to get a life…not a new life, but more like getting back to my old life somehow. I started making lists of things I could do if I wanted to do them, like take my motorcycle out and go riding. I also listed things I used to do that I hadn’t done in a while, that I could do again, such as canoeing or kayaking, or bowling or dancing.  Then I made a list of things I might enjoy if I tried them, like solo camping, or sailing.  And then I made a list of things I just knew I didn’t want to do again, like rollerblading!  Just the exercise of making these lists got me interested in life again and gave me stops on memory lane to enjoy rather than only my time with Kevin and the things we were no longer going to be able to do together.

I never have thought of myself as a creative person, although I have enjoyed doing crafts, and coloring, and visualizing.  One day I found myself with some crayons and paper and my lists.  I had been doing mind-mapping exercises for a work project I was on, and I mapped out these lists.  This is what I came up with.

For weeks, I would look at that and remember the me I used to be and think about me I wanted to be.  As you can see, I added a branch for travel, and I organized it into categories. I was content to just have the list and know that I could do these things if I wanted.

Days turned into months, and soon I was approaching the one-year anniversary of Kevin’s passing, and that was also nearing the time I used to make New Year’s Resolutions. I combined my resolutions and my bucket list with some goals.  It came out like this.

It wasn’t very pretty, and I didn’t feel inspired.  I tacked it to my bulletin board and let it sit. One day, spring arrived, and I had a new idea.  I had been on my sabbatical and given myself some time to catch up on my sleep and let my body recover from the roller coaster ride it had been on.  I was washing dishes when I fixated on some holiday ornaments that had been overlooked and were on my kitchen windowsill.  They were three Santas, holding signs that said Live, Love, Laugh.  Only I saw Live, Love, Matter.  And I knew what I had to do.

I got back out my paper and colored pens, and this time I drew my future. I took pieces of my various lists and put them into new categories, of how I could know I was living, loving, and mattering.  The net result was this.

I knew that if I did these things, and thought of them as signposts along the way, I would be able to redesign my life, while at the same time, achieving progress toward my definition of a successful life.

It’s not on the list, but this past week I found myself doing something I hadn’t done in a very long time – pre-Kevin, in fact. I used to go on work trips and find a day before or after whatever event I was attending to explore the area on my own and do a little window shopping. For some reason, once I met Kevin, I denied myself this pleasure; maybe because he wasn’t there to share it with me so I stopped.  But in DC I took the early train instead of the late train, and after checking into the hotel, I caught a trolley and explored Old Town Alexandria and the waterfront. I had a late lunch at Madelaine’s, and I window shopped for a couple of hours. I eventually made my way to a store called Sacred Circle, home of new-thought-type books, tarot card readers, and all things metaphysical. I splurged on a book on the Japanese art of decluttering (not feng shui) and an  Oracle card deck to provide me “immediate access” to my Divine Spirit.

I can’t tell you how much joy this little afternoon sojourn brought me. Something I had been carrying around in my head disappeared and I actually felt lighter as I walked along the cobblestoned streets. I stopped in another store to have a manicure and pampered myself. Whatever path I am on was reinforced. All my past drama and stress gave way to light and peace.

My work in DC went exceptionally well after that. I had been resisting returning to my former familiar work environment of courts, but I discovered a new sense of pride in being able to share my experiences and helping others on their way to becoming the leaders of tomorrow in their courts.

I am grateful that my life has come full circle.  Or rather, has come around on this part of the spiral and has propelled me forward to a renewed future. Kevin, I thank you and my Divine Spirit for this gift.  My card today says it’s time to take charge of my life. You have to love the Spirit’s sense of humor.