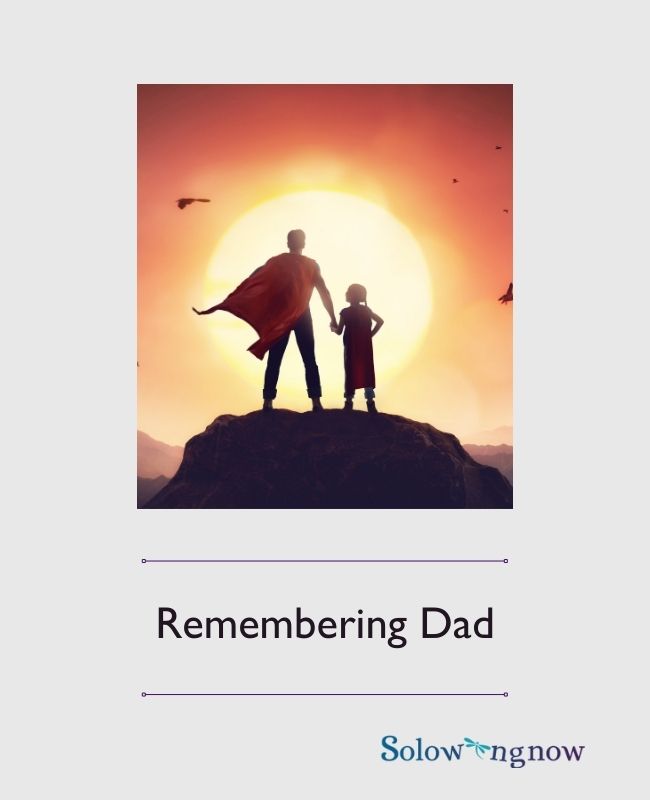 Today is the second anniversary of my Dad’s passing.  He liked to project a tough guy image to us kids, so he wasn’t the Father-Knows-Best kind of dad. In fact, I was often disappointed in his parenting.  I feared him when I was a kid, I challenged him as a mother myself, and I came to accept him near the end of his time on Earth. But I felt as if a bee had stung me at the loss of opportunity for a better relationship.  I felt sad when I got the call, but I don’t recall much crying or despair.

His death made me an orphan, my mother having died in 2002. Her passing, too, was the end of an opportunity for a my-mother-is-my-best-friend relationship.  I didn’t cry much when she passed either, although I did sit on my couch and cry for about three days a month or so later.  She died in late September, and that year I didn’t feel much like doing Christmas. That was also the year I got married to Kevin, which was my second time.  I remember a story my mom once told me, how when she was diagnosed with cancer in 1978, she begged God to let her live to see all her kids married and settled down.  At that time, Diane was 11, Theresa was 14, and Jeff was about 17.  Peggy and I were already graduated from high school and were out on our own.  God granted that wish, but just before the last one got married (Diane), I got divorced.  And so I guess “all” her kids weren’t married.  But then I remarried in July 2002, and now we all were married, so she died in September, new cancer had taken her. I felt guilty for a while over that.  If I hadn’t gotten married, would she have had more time, time to watch her first granddaughter get married the following year?

Kevin died the same year as my Dad, and that was when I started really examining grief and its various dimensions. I had previously experienced the death of all four of my grandparents, several aunts and uncles, some cousins, even a baby brother.  It was the baby’s death that I focused on.  I began to wonder how my parents functioned having to give up a 2-month their first boy (but a third child) to rather sudden pneumonia. How in the world did my mom have time to grieve his loss when she also had a 1-year-old (Peggy) and a 2-year-old (me) to take care of, plus she was pregnant again almost right away? How did Dad go to work every day? I don’t remember them ever (ever!) talking about Greg, although there were a few pictures of him with us girls.  One time the subject came up and my Uncle Ray said something about Greg dying from crib death,  and my mother (for once in her life) came unglued. She jumped up and yelled at him that Ray was wrong, that Greg died of pneumonia in the hospital.  I remember the chill that followed her outburst; I was maybe 9 or 10.  Before that my cousin Sharon, a twin, died of Wilm’s Tumor, a stomach cancer when she was 5 and I was around 12. My cousin Deborah also died as an infant, when I was maybe 8 or so.  So it’s not like there wouldn’t have been opportunities to grieve together, but I just don’t remember it.  I do also have one other memory, of my Mom sitting in the kitchen, looking out the window, and looking very sad but not crying. That made an impression on me, and based on the house we were in (down by the river) and the fact I wasn’t in school makes me think I had to have been less than 5.  I know my Mom had her happy moments after that, and I have pictures to prove it, but I think my Mom always had a sadness about her, too, and I think it came from Greg’s death. When my youngest son was born in 1985, Mom came to visit, and she brought me two baby outfits she had been saving. They were Greg’s…from 25 years earlier. Her only comment to me was “Here. I have no use for these anymore.”  And that was the end of that conversation.

I talked to my sister Peggy about this recently, and she agreed Mom and Dad never talked about Greg.  But yet, she recalled, we always knew we had lost a brother; it was not some revelation we happened upon.  So someone must have talked about it out loud at some time.  I then asked my stepmother Delores if Dad had ever talked about Greg to her. They were married for over 35 years (my parents divorced after 18 years of marriage). She said he never did, and when she asked him about it once, he declined to talk.  So then I called my Aunt Lorraine, who was Mom’s best friend, and she also said neither Mom nor Dad would talk about it, but that it was the way things were back then (BTW, this was 1960).

Both of my parents died of complications from cancer – my Mom had lung cancer this time (a sarcoma in her hip the first time 24 years earlier; my Dad had bone marrow cancer and lung cancer.  Both had been given a life sentence of just a few months, and so our grieving started then. By the time we watched them waste away as the cancers attacked them, I was relieved that our collective suffering was over.  Mom had some denial and anger (after all, she had quit smoking 9 years earlier) but no more bargaining with God.  Dad had been in declining health anyway for years, with various heart attacks, strokes, arthritis, and blood issues, and he seemed to be ready to get on with the business of dying. Mom was 70 when she passed, and Dad was just days shy of his 82nd birthday.   In contrast, Kevin, at 54,  went to bed one Sunday night and never got up again.

The point of this is that while grief is expressed differently for each person who has left us, there is a connection, between all of them and me, and even between each other.  No matter where I lived, or how old I was, or the relationship I had.  The past is the past, and it only exists in memories.  I choose to remember my Dad as someone who was a child once and grew up as a result of the parenting he received. His life was shaped by his experiences as a soldier, employee, father, etc.  He did the best he could at the time, I’m sure. It wasn’t what I wanted, but I too have been shaped because of who he was.  I learned about patience, ambition, independence, acceptance, perseverance, service, and probably a few other things. He was once a small-town mayor, an alderman, and Commander of the American Legion; I probably inherited some of those genes somewhere along the way.  Anyway, I believe in life afterlife. He continues to influence me, and I think he is a better father now, now that he knows better/different.

That is why I recalled one other memory just last night. I was little enough that he still picked me up now and then. I had gone with him to the Pantorium Cleaners to pick up dry cleaning. The man behind the counter said to me, “Why, you must be Louie’s girl. You look just like him.” And Dad swung me up in his arms and smiled and said, “Yep, that’s my girl.”  So, Dad, thanks for this memory. I trust you are free now from all the aches and pains of your life here, and that you are happy. Say hello to Greg, and Mom, and Kevin, and the other Kevin (Farmer), and Grandma and Grandpa and the rest.  And remember to send a white feather.  Like it or not, I’m still your girl.