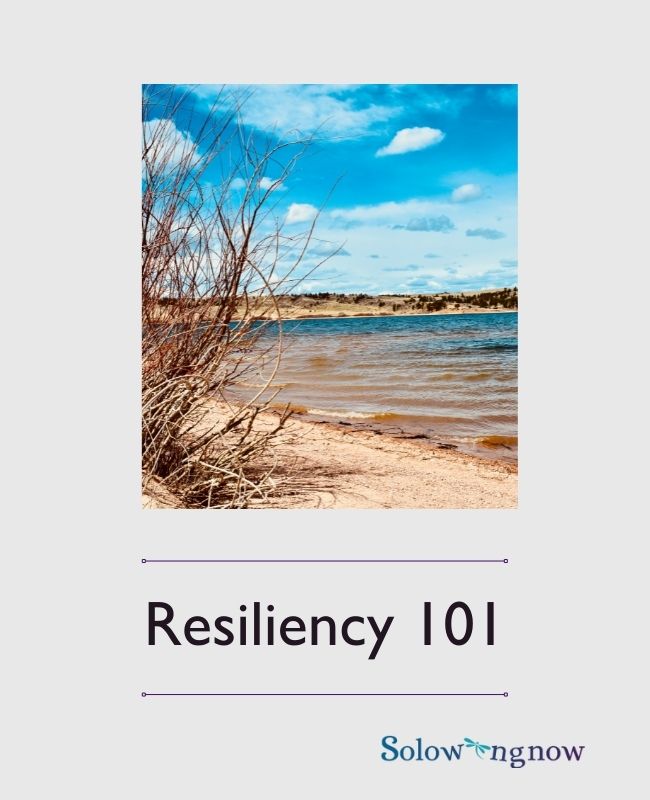 It sounds like some quality you either have or don’t have, which is inaccurate and incomplete, in my opinion. My description of resiliency is the ability to bounce back from challenges of all kinds-personal and professional, whether from a minor or major problem, mishap, setback, or tragedy, due to having engaged in processing my feelings, thoughts, and behaviors to gain perspective and experience. Whew!  That’s a mouthful, I know.

Let me simplify it a little bit…to be resilient or have resiliency means that you have not only taken in data (by reading or being told or doing something or having it happen to you) but that you have processed that to turn it into information you can use in the present and the future. It is an active effort rather than a passive one. This results in an ability to make sense of things quicker and manage them better  each time you encounter something similar after that, although if you tried to take a shortcut or for some reason didn’t or weren’t able to fully deal with the problem/tragedy, you will likely force a do-over at some point in time. Which may make that time worse or deeper, taking longer to handle because of the backtracking and overdue realizations.

The past two weeks have provided ample opportunity for me to test my resiliency. November is the anniversary of my husband’s passing four years ago, a few days before Thanksgiving, and it is also the month of his birthday. I truly think I have done my grief work, having relived or reimagined past losses (his and others) , turning caution into skepticism, and then becoming resourceful and taking action to construct a new normal. I still have my moments (which I expect will continue to happen) but overall, I am a relatively happy person these days, satisfied with my lifestyle, content with my economic forecast, and optimistic and hopeful about the future.

Political elections caused me to evaluate and defend my values against the drama and reality of the community, state, and country I live in. It was a little more emotional than normal because I have vested myself in some volunteerism surrounding the polls.I feel somewhat more affected  individually than usual, maybe because I feel my mortality differently, I have health insurance concerns now that I am not employed, the seemingly constant weather scares due to climate change, and the discontent that has turned into hateful unrest around us.  I have a new concept of how time works, and people who think there is plenty of time for “fixing” things at the federal level have a different perspective. So I am focusing on the local impact and doing what I can. The fact that I am being active about anything is a sign of some resiliency, since it involves being willing to take risks.

Last week my oldest child had her 41st birthday, giving me pause and plenty of rewinds of my past. I spent a day in pajamas moving from one end of the couch to the other, replaying the day I delivered her and other milestones in her life, but mostly about all the turns my life took since then. It sounds selfish in retrospect, since it should have been a day of joy for her, but yet, I am a firm believer that one doesn’t stop having a life because she becomes a mother, particularly as the child is an adult now and we live 3000 miles apart. So, yes, I did obsess (and maybe wallow a little) over how quickly time has gone by and the decisions I made along the way that changed the direction of my/our life/lives along the way.

And then the fires in California created a measurable anxiety, as two of my children live in CA, one in the mandatory evacuation zone of the Woolsey Fire. That prompted a tiny bit of PTSD for me from when my house flooded in 1997 and I had to evacuate. My boys and I stayed in a hotel or with friends for about two weeks, and then began the cleaning and remodeling work that consumed the next six months. But here I am, feeling strong again, in awe that it was 21 years ago, and also proud that that experience helped me prepare for potential evacuation when the hurricane season threatened me for the first time this year.

Rereading this while editing it has me thinking I sound a little selfish….everything is about me. Yes, it is, and I’m okay with that right now. I have discovered lately that if I take time to figure out why something resonates or pricks at me, I can release some stress and turn resentment into acceptance, and anxiety into anticipation. Because I have had these various experiences, and of course, plenty of others, I have stored away snippets of past feelings, thoughts, and behaviors to call on as needed. It is why I know in my heart (not just in my head) that I can survive whatever life throws at me…because I have survived everything that has come at me so far. I wouldn’t want to go down those roads again in real time and wouldn’t wish my storehouse of calamities on anyone, but I am eternally grateful that because of them, I have become more resilient. I can choose my battles and make better decisions because I am not stuck in a rut or clueless and fearful about what’s coming next.

Dictionary.com says that resiliency is “the power or ability to return to the original form, position, etc., after being bent, compressed, or stretched.” That’s silly, because there is NO WAY that anyone can return to “original form” after having gone through said bending or compression or stretching. Life changes us  and at the same time things change around us. We can’t avoid losses, or having doubts, or feeling uncomfortable, or making discoveries, or gaining new understandings that we integrate into our being.  We might joke and say we want things to go back to the way they were, but do we really? I don’t see how that is possible, because once we know, we can’t un-know.  We can’t unring the bell.

I saw a quote recently that is similar to the one on my masthead of this blog.  It read:

A good education can change anyone, but a good teacher can change everything. –Unknown

I have updated it a few times, like this: A good marriage can change anyone, and Kevin changed everything. And, My life with Kevin changed me, and his death changed everything. And, I changed because of Kevin, and then his death changed me again.  I’m sure you could think of other ways to frame this. The bottom line for me is that I have had a terrific (as in terror-ific) life so far; I wonder what else is in store for me? Luckily, I am gaining even more resiliency, so I am ready for it!