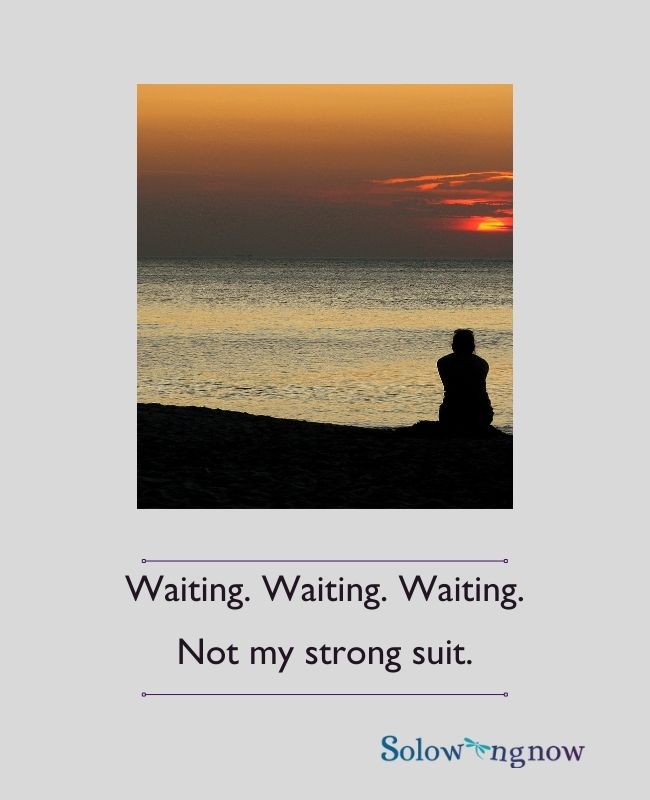 Today is not my day. I’m usually an optimistic person, one who tries to find the silver lining, who gives the benefit of the doubt. But today is not my day. And I almost feel sorry for the technician who will be here soon and will likely get the brunt of my displeasure. Let me tell you why.

First of all, I got up early (for me) to feed dogs, make coffee and breakfast, and take a shower, all before 8:00 a.m. I wanted to be ready in case the Stanley Steemer guy showed up right at 8. Admittedly, the window of time for them was (is?) 8-1 pm. But I thought, just maybe?? So I was ready.

Let me back up a step and let you know this is the third appointment I have made with Stanley. Last week I had an appointment for them to come take the rug to their shop so they could give it a deep clean, both sides. It would take 2-3 weeks. They would roll it, take it, clean it, bring it back, and re-place it in the family room. It happened that I already had it rolled and ready to go. My window of time for them to come was 8 am – 1 pm. The man showed up about 10:00. Imagine my surprise when Stanley told me they do not offer this off-site service, they don’t have a shop to do it in, and in fact, they do not even “move” furniture. It turns out that the corporate Customer Service call center people are not up to speed on local business. My option was to put the rug back in place and have him clean it on the floor, to reschedule my appointment after I had laid the rug, or to cancel. I canceled.

I called another rug shop that does offer two-sided deep cleaning. Their price was about 4x as high as Stanley. Yikes! I had previously tried two other independent carpet cleaners over the past couple of years and was not satisfied with their results. I have a Kirby shampooer of my own, but it did not get the job done. And I have a Bissell pet spot machine, which also left visible spots. I’m not just talking dog pee stains here; I am also talking foot traffic signs, but then again, the rug has a primary cream color. A friend highly recommended Stanley Steemer, so I decided to reschedule.

Wednesday afternoon of this week Stanley was supposed to be here between 12-5. Let me tell you, that 5-hour window is quite a deal … for them! I was ready. I hired 2 men last week to move some other furniture, and I had them put the rug back down for me. But at 2:30 I was notified that the technician was running behind schedule and would not arrive until after 5:00. I had plans that evening, so I once again opted to reschedule, for Friday morning between 8 and 1. I made the mistake of making lunch plans for 1:15, at a place about 15 minutes away. Silly me!

So here I am waiting, waiting, waiting. While I was waiting (BTW, I am STILL waiting 5 hours and 18 minutes later as I write this), I decided to get some work done on the computer. I had said I would scan two articles I had written years ago and send them to my web designer to put on my website which is being revamped. Here’s why today is not my day.

The first page scanned just fine. But then the printer got hung up somehow. It went offline, and I could not get it back online. I turned it off, and back on. I checked my computer. I restarted my computer. Still offline. I restarted the printer again, and the computer AGAIN. No luck. So I Googled what to do. I tried four options. Sledgehammer was not one of them, but I considered it anyway. I deleted the printer from my computer network devices and reinstalled it. Twice. Then I restarted my computer AGAIN. I was venting to my brother, and he asked if I even had a sledgehammer. I do not. Yet. But I do have a long-handled ax, a mallet, and four regular hammers. I tried one more time, one last time, the very last time… delete, reinstall, restart. An hour and a half later, my printer/scanner was working again. OMG!

Meanwhile, back at the ranch … I was still waiting for Stanley. I took the dogs for a walk, hoping that would magically, mystically make him show up while I was gone. Alas, no. I updated my friend that I might be late for lunch. I whined to two different friends. Finally, at 12:45, I told my lunch friend I wasn’t going to make it.

At 12:57, just 3 minutes before the 8-1 window closed, I got a message from Stanley. He is on the way! I don’t know where he’s coming from but that was 18 minutes ago. The poor guy. I wouldn’t want to be him and have me as his customer today. I’m tempted to let my dogs run loose while he’s working on my rug.

So he gets here and asks how I’m doing. Doesn’t introduce himself. I tell him I am exceptionally frustrated that I have had to change my plans again, for the third time, after I have WAITED now more than the window of 5 hours for him, which I tell him is a LONG time. He checks his computer tablet for the time, and questions me; it is 1:00. I tell him it is actually nearly 1:20 and I have been waiting since 8:00. He “apologizes” with a statement that he’s sorry they are short-staffed. I said I’m sorry, too. I understand how that can happen, but they why did they schedule me for now? Why didn’t they tell me it would be next week Tuesday or whenever before they could get here?” He says, “I don’t know, but we’re short-staffed. That’s all I can say.” Really??? That’s it?!? Never mess up an apology with an excuse, people. Any goodwill I was trying to muster up vaporized. I don’t think he was sorry at all; I think he might have been intimidated just a little. So to be sure, I followed him and watched him. Nothing like having someone look over your shoulder, right? I pointed out a spot here or there, and there, too. I made sure I hadn’t gone too far so that he would do a sloppy job, but I was persistent.

Oh, I know it’s not his fault, or at least, it’s not ALL his fault. At least I hope so. He is at the mercy of the company. There, that’s better of me… but I’m still pretty steamed. (Get it? Steamed. Stanley Steemer…) He presented the invoice, and I asked for a discount for the inconveniences I had incurred. He couldn’t, he said. It was already in the system. Wow! That’s original. And not helpful. I told him that it looked like he did a decent job, but that I was not going to recommend Stanley Steemer. He said, “Okay.” I suggested he should talk with his supervisor and let him or her know that he had a frustrated customer. He tells me that the whole day has been like that, that he has talked to his supervisor before because it’s always like this, but there is nothing the supervisor can do. I said maybe the supervisor needs to talk to his or her supervisor. He says, “Well, we’re short-staffed.” He might be a decent carpet cleaner but he lacks customer service skills, salesmanship, initiative, and leadership. No tip for him, either.

I almost feel sorry for the guy. Almost, but not quite. Well, only sorta, kinda. Not really. Nope. I do not feel sorry for him. He isn’t helping himself – at least not with me. He’s young-ish, but not that young, so should have some experience with the world. I don’t know what criteria you use to evaluate skills and service levels, but this one failed all my tests.

I hope when that rug dries, the wait was worth it. At least my hour and a half on the computer/printer this morning yielded working equipment. I think I’m going to take myself for a little joyride and let off some steam. LOL