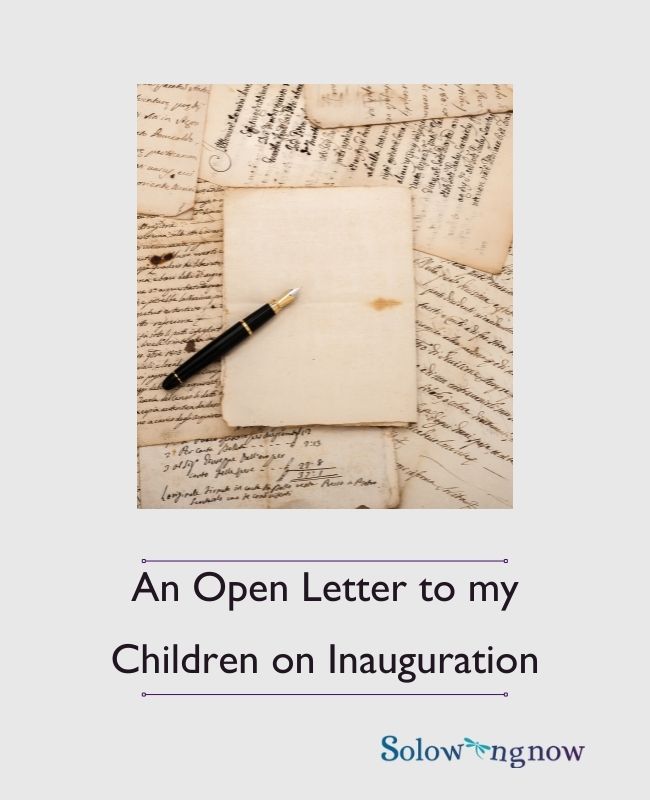 Dear Children, One of the posts I saw on Facebook this morning was from a friend who shared a “good read for those who are afraid, upset and disquieted by what will take place this coming Friday…”  Both she and I are in a Speaker’s Academy, and this Friday is when we have our final “showcase” speech and graduation.  She actually was going to withdraw a week ago, feeling unprepared for the event, but she has reconsidered.  Imagine my amusement when I opened the article and discovered it was about Donald Trump’s inauguration set for this Friday also! It was 10 Acts of Resistance on Inauguration Day, and one of them struck a chord with me.

I am writing this letter in response to idea #7, Reassure Your Children, by nurturing their hope.  I urge you to remember that as dramatic as things seem right now, as impossible as the future seems, as opposite the ideals are of the incoming Administration from what you think you would like to see, please know that it will be okay. You have to trust me on this. I don’t mean things are going to be easy, or feel good, or that all the streets will turn to gold and love and peace will overflow.  But I have walked through some parts of hell already in my life, and I do know there is always something else ahead.

You may not think of it this way, but here are a few things that have happened in my time…things I remember for myself.

In the midst of the political angst over the past 40 or 50 years, I also had some personal shit in my life that helped make politics less important.

On the other hand, while all this (and more) was going on in my world and other people’s lives, good things happened, and are still happening.

I don’t think I am abdicating any personal responsibility by not publicly voicing my displeasure at the state of the world and contributing to that negative noise. I have chosen another way, and I do take full responsibility for my personal condition.  Every week at Toastmasters I join like-minded people who are interested in making the world a better place by improving their communication and leadership s

kills. As I see it, the world is desperately in need of these attributes. Last fall I had the incredible opportunity to see 144 counties sharing a weekend in the pursuit of a better world, at a Toastmasters International conference.  Proof that we can live in a different world. That’s how I serve,  what I choose to be a part of.  As John Lennon said, you may say I’m a dreamer, but I’m not the only one.

Right now there is uncertainty because everything is changing.  Remember, not all change is bad, and in the final analysis, at least we are in the USA, not some third-world country or communist regime. It’s never been a perfect world, and it likely won’t be while we live on this earth. That’s what heaven is for. And there is always hope for a better, different tomorrow because you are here and I am here. We can make a difference, we can make choices, we can prove the naysayers wrong about how bad it is. And with my rose-colored glasses on, just think what it might be like if Donald actually does some good!

I challenge you to continue to be grateful for what you have and to not dwell on what you don’t have. I am grateful that you all are in my life. You and your partners, your children, your friends.

Keep on loving your children, encouraging them, playing with them, nurturing their positive spirits.  Someday probably we will look back on this week and all we feared, but for now, I will remember that January 20, 2017, is my son’s birthday, and the day I graduate from the National Speaker’s Association Speaker Academy.  I don’t have any inclination to cast a shadow on this day by worrying about other things.