The gas gauge indicated there should be half a tank of gas, on a truck that that has about a 25-gallon tank. Yet, the “Low Fuel Level” message lit up. A wind gust buffeted the side of the camper. Although finding a gas station would undoubtedly lower my stress level, still we sat still in the line waiting for the emergency responders to clear the roadway from of the semi-tractor that had jack-knifed ahead of us. There was no telling how long we might be there, and the need for air conditioning was competing with the need to avoid walking when I ran out of gas. Such was the dilemma of that moment.

Wouldn’t you know it? I made safely to a gas station not long after that, and I gave my thirsty truck a big (BIG) drink of fuel. I wasn’t in a hurry as far as the clock was concerned, and we were on our way again shortly. But then the Check Engine light came on, and at the next exit ramp, we were off again to figure a plan of action. Luckily, there was a truck stop with a 24-hour maintenance shop. Except they only serviced big rigs. However, they referred me to a 24-hour wrecker and auto repair shop nearby. Tommy, the technician, guessed it was a loose fuel cap, and hooked up a sensor to the truck’s computer. Yep. A quick reset, and we were on our way once again.

By the way, “we” is me and three dogs – who are unsurprisingly useless in a crisis, but at least they didn’t cause any further stress by howling and growling. They were much more patient than I was, thankfully.

This was the second leg of my adventure. I spent the first day traveling to Elkin NC and survived a wicked thunderstorm in 5:00 Friday night traffic in Winston-Salem. Yeah, I know, good planning on my part, right? Anyway, I had an absolutely wonderful time Saturday on the Blue Ridge Parkway, revisiting Blowing Rock, and getting the feel of my camper and truck on a cross-country trip. So making it through Nashville’s spaghetti system of interstate interchanges was done by a fortified driver.

I was relieved to make it to Memphis, anticipating Graceland’s tour scheduled for Monday. It was too bad some jerk parked his truck quite close to my campsite, making backing it and setting up harder than it should have been in the dark. But two women from Ontario, Canada, Dawn and Louise, were very helpful, so all was right again in the world. (If their names had been Thelma and Louise I might have had second thoughts about letting them guide me.)

The next day would be a long-awaited visit to Graceland, but as I finally laid in bed that night, my mind was filled with thoughts about how I was living out the Solowingnow name I had given myself. Of course, we are never fully alone. I did have my dogs, but I also am certain I had divine help in the form of angels helping me along the way. How else do you explain that I never once had a close-call with merging onto interstate traffic because the lane was clear a mile back? Or that I made it to a gas station in the nick of time, and that I found not one but two 24-hour service stations on a Sunday night? I think we often think we are alone because we don’t see anyone else, but I was not unaccompanied either physically or spiritually.

Other thoughts also kept my mind entertained for a while that night. I remember thinking that Kevin would have loved this trip. He would have loved the scenery, the challenge, the upcoming sights to see, the freedom of the open road. And then this bright thought occurred to me: as much as he would have loved it, I also loved it. I promised myself right then that I would start now to put myself first. It is all well and good to think of others, but my first responsibility now is me. I can invite his spirit to come along for the ride, but the realization that it is indeed an invitation means that I have completed another phase of adjustment toward this new life I am living. I am no longer waiting for it to be my turn; I am claiming my place at the fire of the strong, brave, wise women of the world. I have my own stories to tell now, and this trip is just one more collection of memories that comfort me.

I am blessed – and I know that I am blessed – to have this opportunity to travel. Beauty is in the eye of the beholder, as “they” say. I have been to the ocean, to the mountains, across the prairie. I do not have to choose one over another. That is freedom. 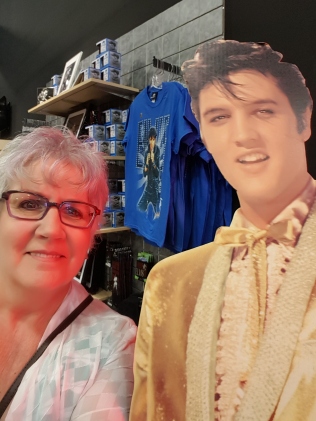 Here are some sights along my way so far. More to come as I settle in.