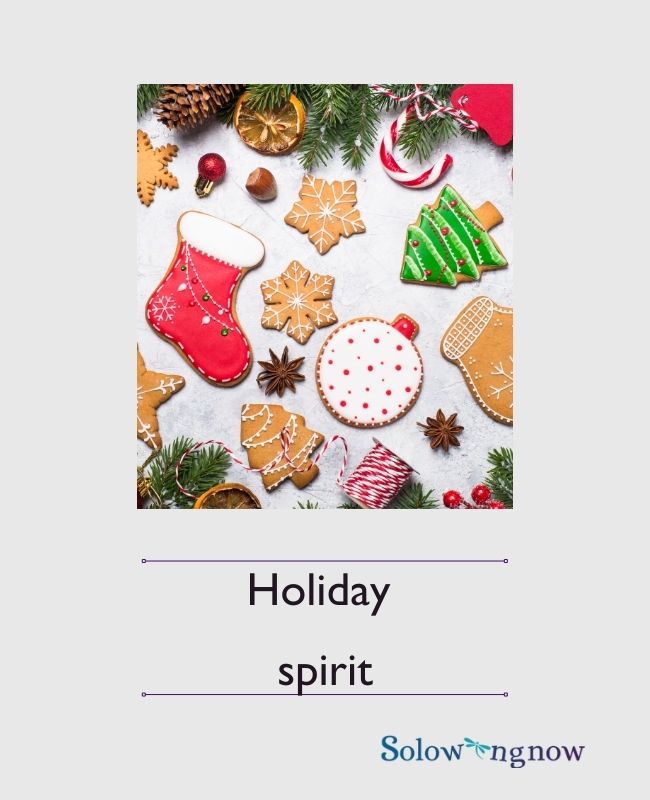 There used to be years when I had all my Christmas shopping done and packages mailed by the first weekend in December.  The cookies baked while Christmas music played. I put up Christmas villages and multiple Nativity scene displays.  I decorated every room in the house; I even had Santa shower curtains and rugs for the bathroom!  I don’t think it was just because I had kids living at home, or family coming to stay for the holidays, but that might have had a little to do with it.  That has changed.  Last year I was planning to go be with my kids out of state, so I limited what I put up, but there was a small tree. I still wasn’t really in the mood to celebrate holidays, even though I had started my sabbatical and thought I’d have all the time in the world to enjoy the season.

This year I planned to change that, except now I’m going to go to the kids again. And I have this dang business to run, and a Showcase Speech to

prepare for a Speaker’s Academy I am enrolled in.  I did take down the fall decorations but they are all on the table patiently waiting for me to actually put them away.

That doesn’t mean I have done anything, but just that I haven’t done much compared to what I … want? need? like?  I just can’t quite find the peace I used to enjoy during this season, even amid all the hustle and bustle and baking.  So far, no tree but there is a Santa, some reindeer, and a few nutcrackers. Santa is not in jail, by the way, he’s peeking out at everyone who comes in the front door! 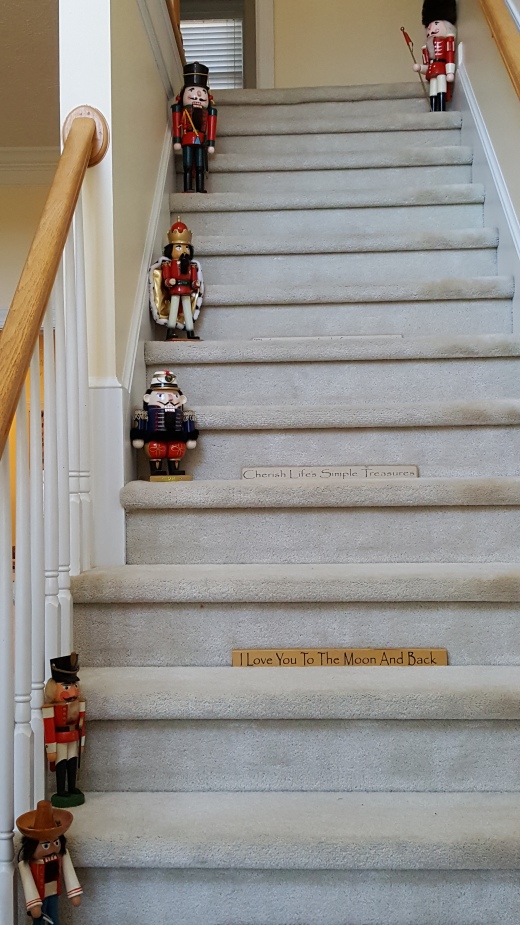 All is not lost, however.  Some traditions remain, if not intact in their entirety.  The reindeer with Santa I have had since my days living in New Mexico.  I got them at a craft fair in Albuquerque at least 20 years ago, and I just love those wooden little guys. They are like a puzzle, with pieces that have to be put together.  I remember the first year Kevin saw them, and he laughed because apparently I had been putting the legs on wrong. I thought there were two matching sets, one for each reindeer. It turns out one is front legs and one is back legs, so I had given one deer two fronts and the other got two backs!  Forever!!!

The nutcrackers have a story, too.  On the bottom left, the bandito, and the soldier just up a step from him, I bought in Germany in 1977.  I gave the bandito to my dad for Christmas that year, and the solider went to my Mom.  Now that my parents have both passed away, these have made their way back to me.  The other chubby ones further up the stairs I only bought last year here in Williamsburg.

I have boxes (big boxes) of “themes” like this. I could open my own small Christmas Mouse store, I think!!! One year I might just put up snowmen, for example.  This year it’s nutcrackers.  I also have different kinds of decorations. Once I married Kevin, we used to put up 2 trees each year. His was a South Dakota tree with wooden animal ornaments, rustic bells, “barbed wire” garland, pheasant feathers, etc.  My tree is usually picture ornaments of everyone in the family.  Kev and I also collected a special pewter ornament each year, with a single word or phrase that summarized that year. One year it was Mr. & Mrs., and the year Layla and Isla were born, it read Grandma & Grandpa. Another is Pierre Pressure, and it was followed by Pierre Pleasure; that was when I moved and he stayed in Brookings, but then he joined me after Ethan graduated high school. There is Honda Highways, when I got my motorcycle. I have a Nativity that was handmade and was a wedding gift the first time I got married almost 40 years ago. It’s kind of ugly, in fact, and the pieces aren’t proportional, but I am grateful for the fond memories it evokes of George (the one who made it), the joy of my early days of married life, and what it was like to be 19 with a husband and baby.

One thing I used to love to do at Christmas time was make time to go to local concerts and enjoy the music.  Right now I’m listening to a CD of South Dakota Acoustic Christmas Band’s annual show. I think I probably saw them a half dozen years.  I have a CD from a Tonic Sol Fa concert I took my mother-in-law to in Brookings one year.  That’s one is on deck for when Acoustic is done. And so last night I heard about a performance of The Ford’s Colony Dance Band, who would be playing big band-style Christmas music in the library’s theatre.  It was 90 minutes of wonderful uplifting fun.  I’m so glad I went. (No CD’s for sale.)

My traditions are sorta-kinda out the window these days, but I’m grateful that bits and pieces of them are still tucked away in my heart.  I guess I’m proof that that the only certainty is change.  And since life goes forward, not backward, I have to agree it’s okay. I think I might put away the fall pumpkins and hang a few lights outside around my door later today when it warms up a bit. I might even try and do some Christmas shopping. Heck, I still might decide to put up a tree!