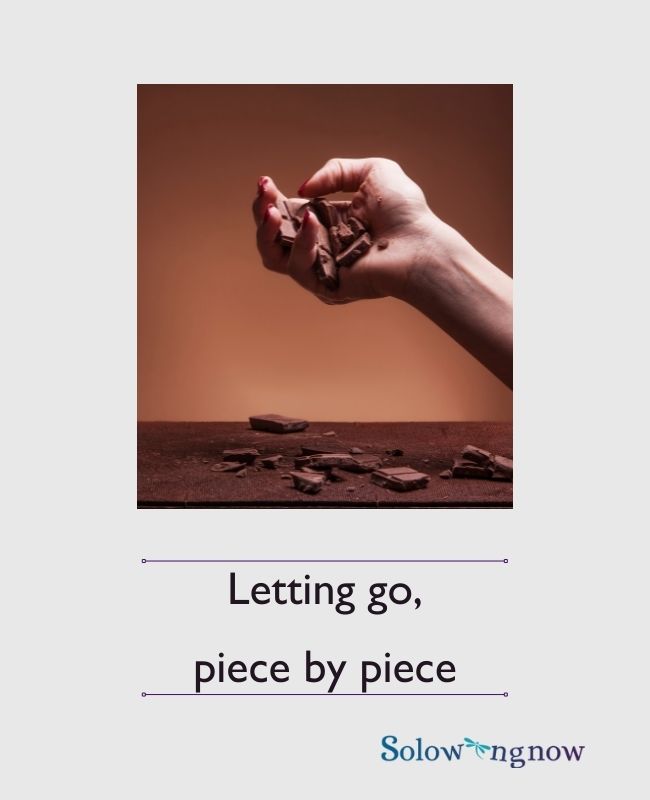 First, I let the truck go, about two months after he had died.  It wasn’t paid for, and it wasn’t registered in my name.  It was big for me, and I had another vehicle – my car – so I didn’t need this…. this reminder of

what we fought over from time to time.  When I talked to a friend about it, she said, “Why are you agonizing over this so much?” I told her it was because it meant so much to Kevin.  Her reply stunned me, “Well, you meant a lot to him also. Would he want you to be this upset over it?”  Of course not.  And so I surrended it (read: voluntary repossession) back to the finance company. I still felt bad, at least I did until traded in my cute convertible on a new Highlander since I realized I did want something to schlep stuff in.

A couple of weeks la

ter, I started in on the house.  I called Habitat Restore to come to get his recliner from the family room so I could think about redecorating.  And I got rid of my matching one as well.  They were nice chairs, still relatively new.  But the style was going to have to change when I got rid of the “man cave” look.  My same friend went shopping with me.  I put most of the rest of his things in his closet.  I kind of miss those comfortable, put-your-feet-up chairs.

It took a few more months before I could clean out his closet.  Luckily, we had separate closets so I didn’t have to look at or smell his clothes every day.  I just kept the doors closed.  At the end of May, about six months after Kevin died, my same friend came to help me pack up the clothes.  Everyone needs this kind of friend.  She even took the bags of clothes to the DAV Thrift Store so I wouldn’t procrastinate and drive around with them in my trunk for a few months.  I still have to get through the hunting clothes, the underwear box, the coats, and the motorcycle gear.

In May I consigned his motorcycle for sale. When it was still on the lot in August, I was about to put it back in the garage, and the very same day I made that decision, I got an offer.  So bye-bye.  I cried when I left it at the dealer.  It hurt to see him go out of my life one piece at a time.

The boat had also been consigned, and it took from February until September to sell.  I felt bad that he had only had it in the water one time here.  I contemplated taking a water safety course and trying to use it myself, but that was foolishness. I didn’t even like it all that much when he was in charge!  It’s a small fishing boat, and I always felt vulnerable in it on big water.  I was relieved to hand the keys off to someone else.

Today I took another step.  I had dinner at a new restaurant about a year ago.  The owner was in the process of changing the theme from a tiki bar to a hunter’s grille.  I asked him then if he might be interested in some dead animals (my term of endearment for Kevin’s mounts).  He said yes and gave me his card, but I lost the card. I guess I wasn’t ready yet.

Last week I went back to the restaurant and saw that he had gotten rid of the thatched roofs over the booths and most of the bamboo was gone, but he was sorely lacking in décor.  I again asked him about the taxidermied trophies I had in the closet.  I had given a bear head to my nephew, and I wasn’t ready to part with the Redlin plates yet, but I did have 2 deer, a turkey fan, a goose, and two ducks, and a spare set of antlers.  This morning he came to the house and bought them all.  It wasn’t as if I won the lottery, but I’ll get a few free meals at a good restaurant and maybe a set of new cushions for the chairs on the back deck.

It’s a little over 14 months since he passed on.  And it’s still a tender moment when I let go of one thing or another, even if whatever it is has been sleeping in a closet all this time. Almost all of these things were very much Kevin’s taste and style, not mine. In fact, I remember my dismay when I first met him and he told me he was a hunter. I could not believe I was so open to having dead animals in the house.  But I loved him, so, therefore, I never minded.  It’s interesting to me…it was not a compromise at all; it was completely acceptable.

I think Kevin would be proud of the care I gave in passing along his things to people who really wanted them, and only when I felt ready.  Especially the dead animals. He called the small deer here “dog deer,” and I know he’ll be beaming to have people admire the nice Dakota-sized deer and the tasteful way the goose and duck were mounted.  This way I also can still visit them when I go have a free hamburger!  I still have the best part of him, though, my memories.

PS. I still have a few things, like a remote-controlled mini helicopter, and a set of golf clubs, and a bicycle…among others. If you are interested, let me know.  :o)