It started with winter weather

We had some winter weather here in Virginia last week. Depending on where you were, the snowfall was around 8″, give or take a few. Temperatures dropped to single digits. 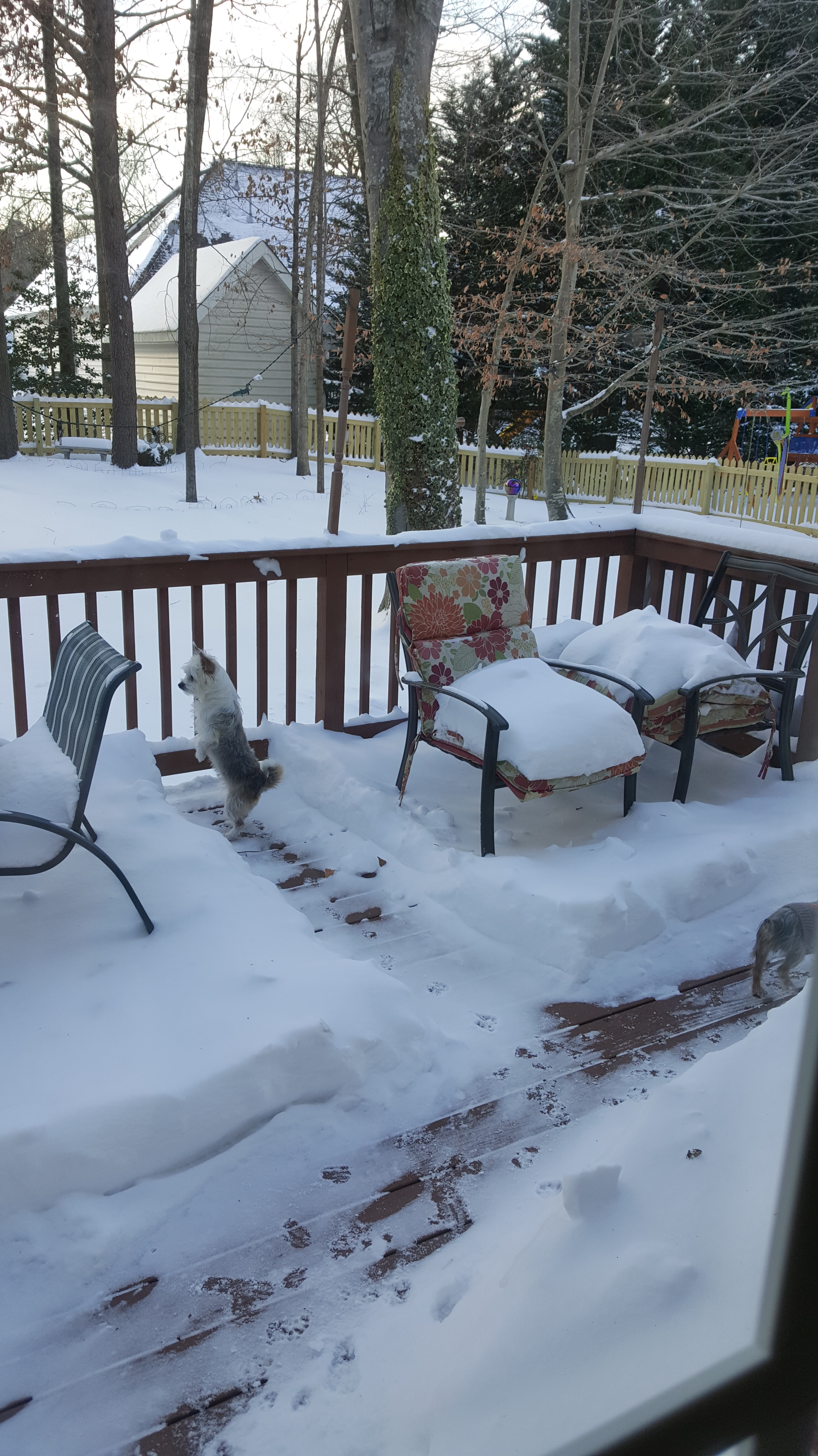 Everything shut down for a few days, and I mean everything. Schools are still closed since there isn’t much in the way of  street-cleaning machinery and the busses can’t get around. My neighbor had frozen pipes in her house, and one of my own dogs refused to go outdoors for you-know-what.

I’m a Midwest girl, having grown up in Minnesota, and as an adult having spent many years in South Dakota.  I simply put on my Cuddleduds, which is “base clothing for layering” (also known as long underwear), heated up the apple cider and threw in some 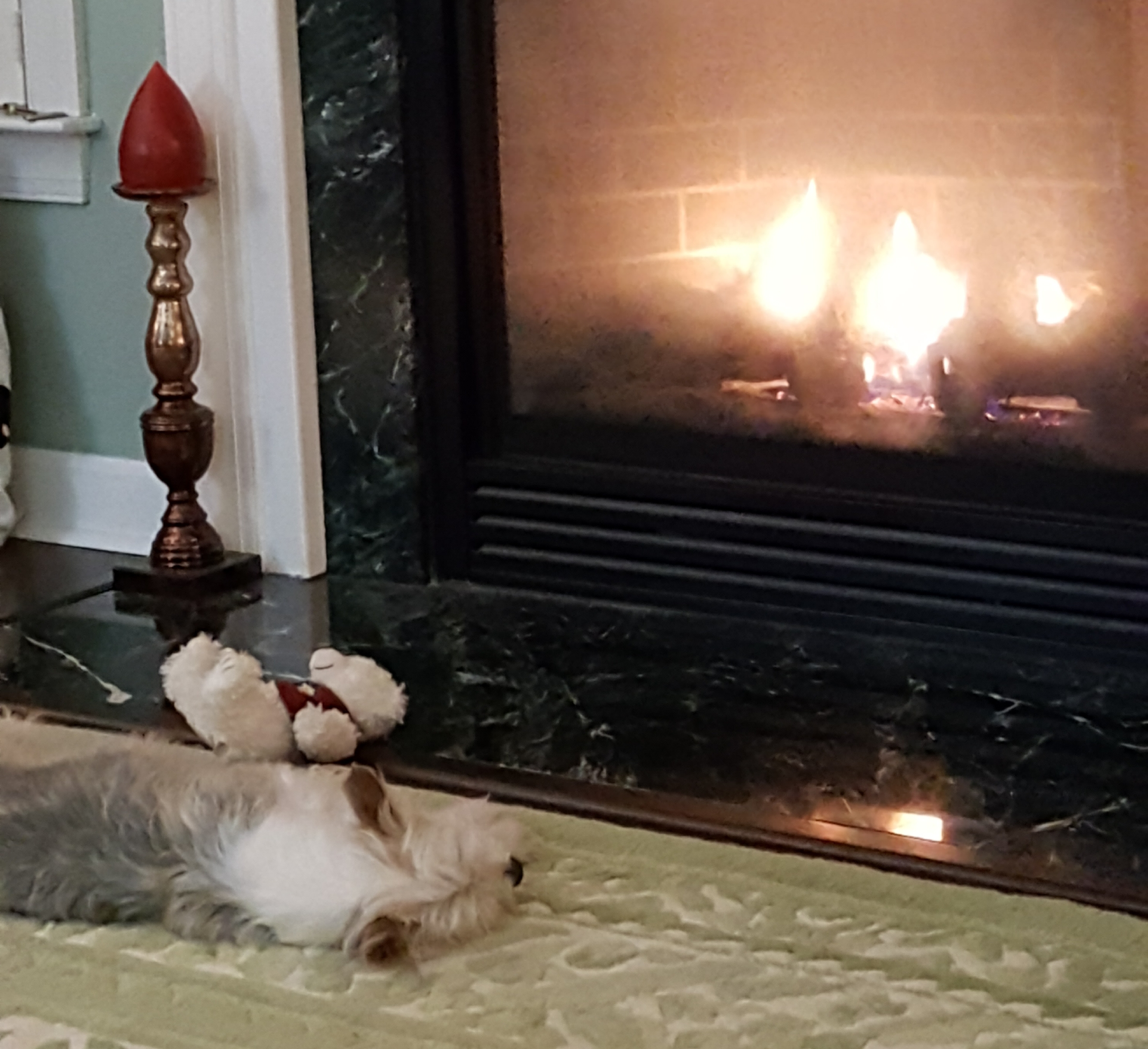 Red Hots, flipped the switch to turn on the fireplace, and snuggled up with the dogs to do some reading while the crockpot cooked my Taterflower soup.  When I went out for fresh air, I wore a below-knee length down coat, gloves, a hat, and a scarf. And snow boots.  The wind only blew that first day, and after it stopped snowing a day later, the sky has been blue and the sun has been shining.

While many are complaining, I find it somewhat amusing. But that’s because my point of reference is different from theirs. People here are not used to cool temperatures, much less below-freezing days. They don’t have – or if they have it –  they don’t wear appropriate clothing.

It snowed last Thursday, and the weekend was when the cold front moved in. By Monday the temps were in the 40’s, yesterday they were about 50, and tomorrow is supposed to be in the mid-60’s.  I knew that the snow would melt soon enough and planned to save myself the strain of shoveling. But some neighborhood boys, probably freshly-minted teenagers, came around looking to make a few dollars. 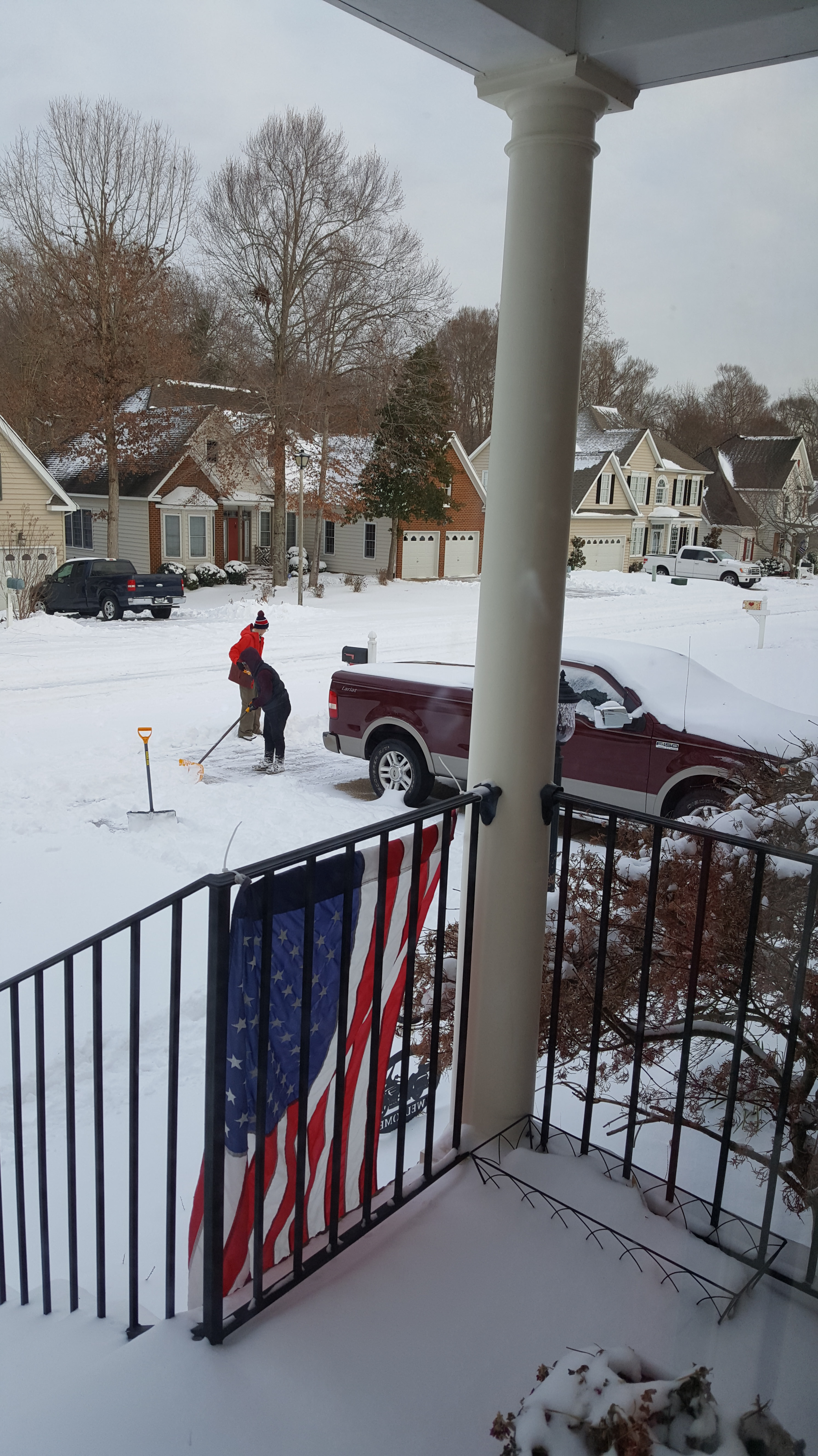 We’ve all heard about today’s kids and how lazy and self-centered they are, always plopped in front of a video game or growing a hunchback from bending over their cellphones. Here were three enterprising kids, willing to work for money, providing a needed service. I was more than happy to reward their spirit, their way of showing us that not all kids are hard to get a long with.  They wanted $30, which was $10 each, but all I had in my wallet was $29 – truly! Fortunately, I had just taken a pan of chocolate-chip cookies out of the oven, so we made a deal. In my experience, kids like food almost as much as they like money!

I can appreciate that swift shift to a milder winter, but for many here, it’s not soon enough. They haven’t lived through a winter that starts in October and ends in April, or one that has dropped 120″ of snow on you, or one where “snirt” is a real word (it’s dirt and snow that results from constant winds). They haven’t had to slice open a snow drift that is knee high and packed in like concrete where the garage meets the house. They probably have never climbed out a window to shovel their way to the front door . Yes, I have, so I know how bad it could have been and wasn’t.  It’s sort of like “you don’t miss the water til the well runs dry,” but not really. It’s more like you don’t know how good this is until you’ve survived a flizzard (yes, flood & blizzard) that forced you to sandbag your house during a snowfall.

I had lunch with some neighbors yesterday. Cabin fever had set in and most were anxious to get out. As we shared news from other neighbors who had gone south for the winter (ha!), I realized it’s not the just the weather that I view differently. My point of reference on many things is vastly different from theirs.

As you may know, my career was spent working for the judicial system. My views on true/false or good/bad or judgment or passion or blame or “rights” are all influenced by what I saw and heard and know.  It’s unfortunate that the court of public opinion seems to hold more sway than reality these days. Sensationalism sells, and with the proliferation of online instant access, waiting for the facts isn’t in vogue. I tend to stay out of the fray much of time, taking a wait-and-see approach, preferring to form my own opinions rather than have someone tell me “the way it is.” I have enough life experiences of my own now, and less of a need to rush to judgment, to get on the bandwagon too soon. Admittedly, I sometimes go days without checking the news at all. The advantage is that I don’t get depressed or desensitized by the headlines Usually there is better information (and thus a more complete story) by the time I check in.

My point of reference (and my reactions today) for  medical emergencies, for example, is based on my experience as a parent, and since it takes a village, my quasi-parental role as an aunt and friend. There were broken bones,  car accidents, cuts caused by running into barbed wire fences and metal flashing sticking out of a well house cover, an axe that sliced open the top of a foot when chopping wood, and a successful suicide (but also some unsuccessful attempts), an accidental overdose, and a few DUIs. I know the difference between a mishap, a setback, and a tragedy.

Similarly, each death of a grandparent or cousin or uncle or friend built up my storehouse of experiences to call upon when my heart was bruised or broken. From failed relationships, to disappointment in  my parents or a boss, to the death of my husband and  even my dog, I have a place I can go to in my own little world and reflect on what else could have happened but didn’t.

Not all comparisons are bad, of course. There is good ice cream, and then there is real Italian gelato eaten on a cobblestone sidewalk in Florence. There is having an old Ford conversion van or upgrading to a brand new 5th wheel travel trailer. There is the ocean and the mountains. There is a karaoke in a bar that reveals a pleasant surprise, and professionals like Josh Groban or Miranda Lambert, but then there is the purest of joys when your kids video a roadtrip sing-a-long in the car on their way to Christmas vacation.

My point is, life is to be lived. If you do some living, your points of reference expand, making things more tolerable and enjoyable and meaningful. A week of winter weather becomes a few bonus days to clean out the closets or do some home cooking or have nothing better to do than read a book while snuggled with the dogs by the fire.

I say, bring it on!  I’d love to have a new perspective on what it’s like to live my tiny camper for a month or two, or to gain a sense of accomplishment from having traversed the back roads for a few thousand miles.

I think it’s when we are alone with our thoughts for a while that we can more fully appreciate not only the beauty around us but the goodness within us. I plan to do some more living this year. And so when you ask me what I think about something, I might just have to ask in reply, “compared to what?”