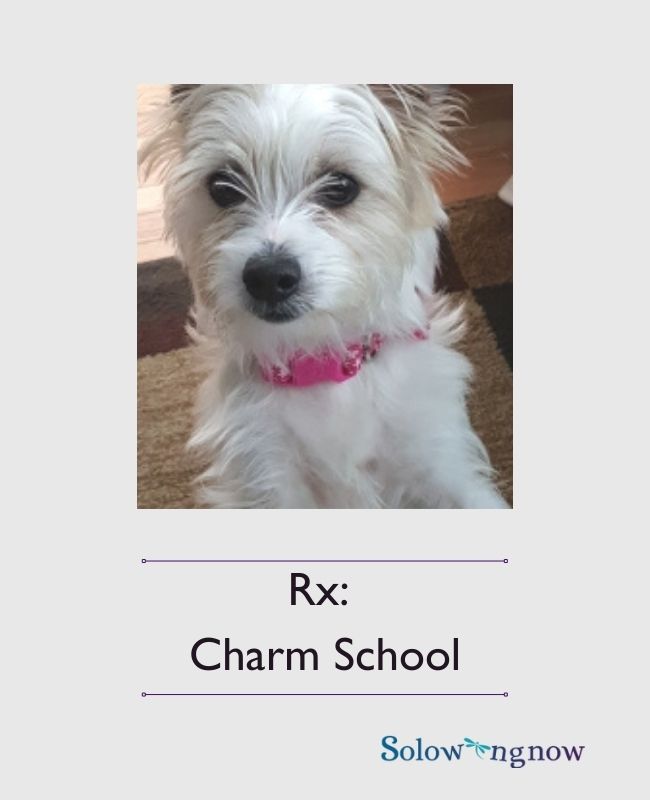 Flailing arms and legs, jerking head, baring teeth, and otherwise squirming and twisting every which way but loose (literally). I’ve seen people have seizures, and it wasn’t that. And it also wasn’t over, by a long shot. So far, it was a draw as to who was ahead in the battle to trim the toenails.

I was secretly glad to witness that the veterinarian, a professional who even had an extra set of hands from her assistant, wasn’t much better at this than I was all by myself. At only 3 years old and 13#, Sasha was holding her own, but in the end, she came away with a nice set of short nails, a treat, and a recommendation for attendance at charm school. Seriously.

Then it was Harley’s turn. At around 12 years old but just barely 6#, he still proved to be a contender. In fact, he held out longer than Sasha did, and I was proud of my boy for the way he defended himself against the crafty pair with the clippers and Dremel.

After all, he is blind, deaf, and has no teeth, and did I say only 6#? So his acrobatics against those two sighted tricksters was admirable. No recommendations for manners for him, but I’m guessing the hope was that I would be the one to learn something, and then I could somehow transfer all my new knowledge to him as well.

No offense taken; I know my kids are the product of their parenting… mine and whoever had them before me. Since it’s just us now most of the time, I let them get away with a lot, and they know I’m the Alpha. When it gets tricky is when other people or dogs are involved. It doesn’t bother me to let them be what they are, which is dogs, or more appropriately, animals. Yes, they sit on the furniture; it’s where I sit and I like to cuddle them. Yes, they sleep in bed with me; I don’t mind sharing a king-size bed that would otherwise be too … let’s not go there … (although I do whine about them sleeping on top of me). Yes, they bark at the neighbors walking by; when it gets to be too much, I just close the door. Their biggest crime (and this is all of them) is when they insist of eating breakfast at 0’Dark 30 in the morning. But I also have seen and heard Sasha get territorial and self-protective. And those nails do scratch me.

Can you teach an old dog (or mother) new tricks? Or a young one who has been flipped and flopped to four homes in the one month before I got her last year? Oh, did you see that? I am already making excuses for her (and ultimately, me). Yikes! I’m an enabler!! I can see it now. Darn it. You know what this means. I can’t un-ring that bell. I will at least have to give that trainer a call now.

The proof is in the pudding, my friend Diane says. I guess we’ll have to see about that. Stay tuned for the continuing saga of Sasha Goes to Charm School.

By the way, the rest of the annual checkup was all good. Weight gains, skin healed and fur flourishing; all test results fine; vaccinations given without incident. The vet did mention something about brushing Sasha’s teeth every day to keep plaque down. Like that is going to happen without me losing a finger or two. I’m sure that was a joke.

I feel pretty good about my critters and my role in getting them healthy and feeling safe. I feel like I’m just now getting to know the real dogs instead of the scared, stressed out, uncertain ones I rescued last year. (Truth: I am pretty sure they rescued us, me and Bo both. FYI, Bo happens to be fully recovered and bounding all around these days, either following Harley or escaping from Sasha. Grateful that his earlier paralysis this spring has gone away and that he has gotten used to his furry mates.)