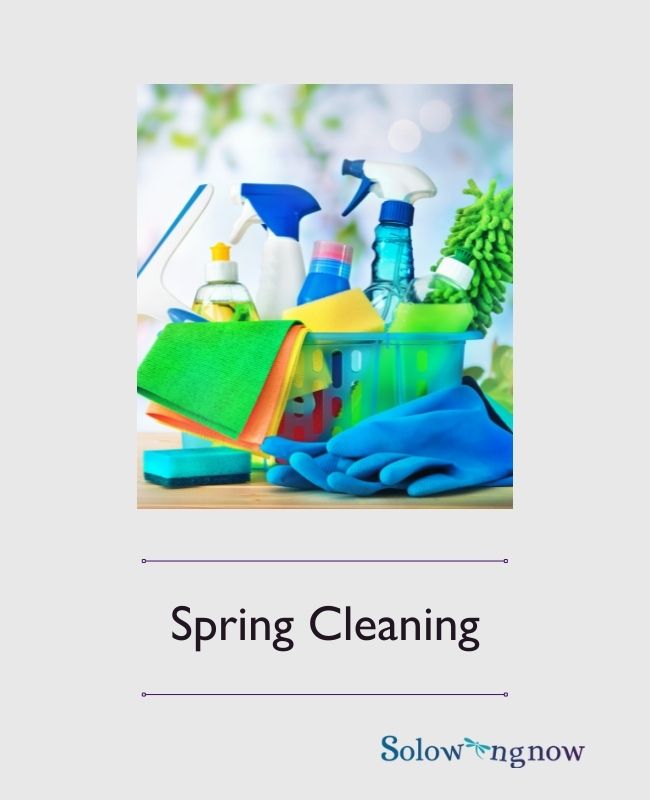 I am excited to have a stream of companies visiting in the next several weeks.  My cousin Debbie arrives this week Friday, my sister Diane and her family will be here the following weekend, and at the end of March, my friend Diane’s aunt and uncle will be staying here while they attend a family get-together so large Diane can’t house them all at her place.  I love having company and am looking forward to the flurries of activity.

For me, having guests means I have to do an extra cleaning routine, like dusting where I usually let the dust bunnies sleep in peace. But it’s springtime so I took advantage of the nice weather over the weekend to open the windows for a while and get some fresh air in the house. As it happens, last week at Toastmasters, my new friend Roxanne gave a speech on decluttering.  She emphasized how that process not only clears the physical space around us, but it has the added benefit of clearing out mental space as well.  She recommended a book called The Life-changing Magic of Tidying Up by Marie Kondo, which I haven’t ordered yet. However, I was motivated to get rid of the last two boxes of stuff I brought home from my work office when I started this sabbatical last November.

The only way I could make room for the papers in these two boxes was to get rid of other stuff.  So I off-loaded an old computer printer and an equally ancient (2008?) laptop computer that Kevin does use anymore (haha).  And then I was fortunate to have a neighbor and kindred spirit of my hunter-fisherman husband come and relieve me of a large box of what a woman might call “excess accessories” and a hunter would call “necessary equipment.”  He’s also going to check out the options for a new home for some goose decoys and several fishing rods and tackle.

My thought is that I can help other hunters and fisher-people by providing the equipment they might make use of and I no longer have a need for.  Among the stages of grief, helping others is often recommended as an adjustment step toward final acceptance of the loss and moving on in one’s life.  As I  let go of Kevin’s possessions, I have remembered how surprised I was when my stepmother still had not gone through my dad’s things nearly a year after his passing. At the time, I wasn’t sure what to think. Was she still in shock? Certainly, she seemed disorganized and stuck, at a minimum.  Ah, if only I knew then what I know now! I had little enough compassion then, didn’t understand what she was going through.  I have since talked to her and apologized for my lack of understanding and what was no doubt some judging of her on my part. I’m happy to report she has forgiven me.

Many days fly by, and some drag on endlessly.  I take two steps forward and then one step back, and while it can be a struggle, that’s still forward progress.  I think most of my slide down the slippery slope of grief is over.  I haven’t had any emotional outbursts in quite a while, and even the occasional teariness is abating.  I am actively working on getting reorganized, engaging in more activities, and strengthening my relationships here.  A few new patterns related to a working style are emerging, and I am mostly optimistic about my future again.  Sounds like a healthy recovery, don’t you agree?

My mom was from that generation where Spring Cleaning (yes, with Capital Letters) and Fall Cleaning were traditions.  She, too, has joined the Angels Above, and I know she was telling her friends she taught me everything I know about bathroom floors yesterday.  I know this because I found a penny on the floor behind the commode in the guest bathroom (which I don’t use).  She always sends me pennies from heaven. Thanks, Mom.  And yes, it’s nice to have a shiny clean house.  At least until I let the dogs loose again. And if I don’t have any company later this year, I might forego the Fall event. I gotta tell you, I’m tired!