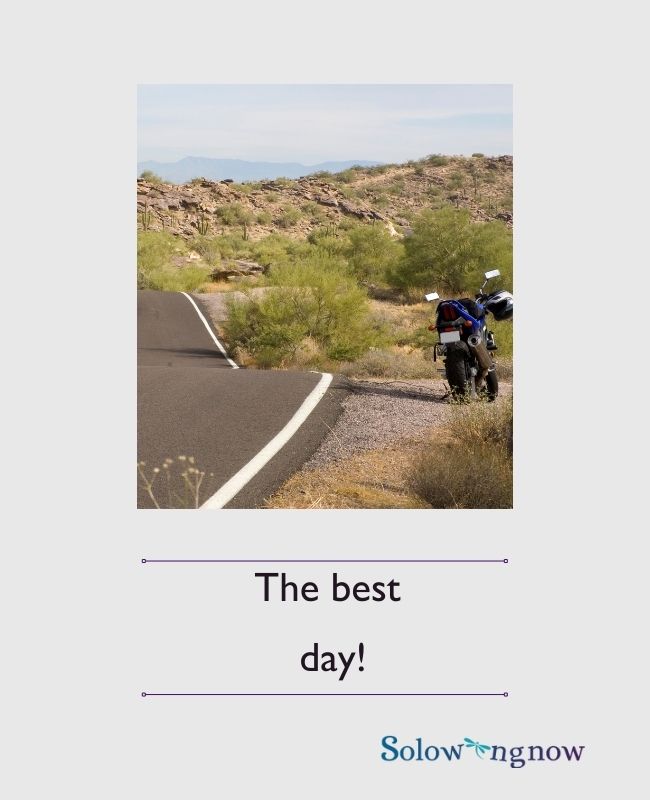 When is the last time you had one of those days, the kind where After All That’s Happened, you had a simply peaceful, just-right, nothing-is-going-to-stop-me-from-feeling-this-good kind of day?  It’s like having a sore muscle or pinched nerve relieved with a massage, and now you can’t remember what the discomfort was like. It feels that right. It’s a bit of an it’s-finally-coming-together kind of day.

Today is one of those days for me, just simply fabulous. The funny thing is, there is nothing exotic about it except for its fabulousness. It’s not even 3:00 in the afternoon yet, but let me tell you about it.

I was awakened by the sound of the Recycling Co. truck in the distance, so I hurried to get my bin out to the curb. You just never know what time of day they are coming by, and it had rained hard off and on yesterday, so I kind of forgot about it last night.  But out I went, in my pajamas, which is really a light pink, sleeveless shorty nightgown. Mission accomplished with no neighbors outside – although for all I know they were peeking out their windows and waiting for me since I seem to usually be the last one on the street to get my bins out there.

I felt a little bit of guilty pleasure for my PJ escapade, and when I got back in the house, I did check quick and see if I had on dark underwear that might have shown through, but I was safe.  It was so beautiful out, though. I wanted to stay out and enjoy more of it.  Alas,  the cushions on my deck chairs were soaked from yesterday’s rain. One of these days I have GOT to get covers or one of those Rubbermaid chest things to keep them in.

So I made my coffee and sat in the living room with the back door open. It smelled earthy and fresh and promising somehow, like a secret waiting to be told. The birds were chatting about it, probably commenting to each other how all the flowers and bushes and plants were so perky this morning. The light breeze not only felt like breath on my shoulders, but the deck flag floated back and forth like it was a Royal giving a wave. It was just so perfect in that moment.

I realized that Something Was Happening. In me.  I was totally free. For no reason except that I wasn’t just seeing some distant silver lining, it was within reach and inviting me to touch it.  That fleeting feeling stayed with me, though, and became a long minute, and then it was several minutes.  I actually checked the clock to see if time was standing still for me, but it wasn’t. Nothing out-of-body going on, just that for once I was truly In The Moment. And it was amazing.

I started wondering: how does this happen? Why wasn’t there a notice of this upcoming special day? If I had been given an opportunity to get ready, would I have done so? Where do I put in my order for another such day? And when I did that, when I got into my analytic mode, I could literally sense it slipping away. So I stopped. Just like that. I stopped asking anything, and I just reveled in the perfectness. It was a few minutes after 9, and the lightness has stayed with me all day. I feel open and happy. It’s inexplicable. And fabulous!!

I’ve heard it said that when something like this happens – and this was really really good for me – people tend to say that that they are in the heart of God at that moment. I think, though, that God was in the heart of me. I was in Ray Steven’s old song, everything is beautiful in its own way.  I have been given a gift today.

I remember one Sunday afternoon when Kevin and I were motorcycles riding in South Dakota; we were out by the Oahe Dam. There were some darkening clouds in the West but we thought we had time yet to make a quick run up to the bluffs past the overflow thing.  I was in the lead, and as I came up the hill and took the last curve to the West, it was like a door to the world had opened up in a movie scene.  I had to pull over because the awesomeness of it, the raw natural beauty, was overwhelming. I felt my soul filling up and I was totally in the moment. Kevin pulled up beside me and we both just took it all in. The only words spoken were when he said  “My God,” and it was a prayer.  I was totally connected to him in that moment as well.  We were both dressed in full leathers, but trust me, that was one of the most intimate moments we ever shared.

This morning was almost like that. I wasn’t meditating, I hadn’t been drinking, I had no particular musical or other inspiration.  But it was a perfect moment. I’d like to think I’ve had many of these kinds of perfect moments, and now that I’m giving my memory a workout, a few others are coming to mind, once in Germany, that afternoon in Indianapolis, several in Santa Fe, outside Charlottesville; yes, I’ve known I’ve been blessed. In over 21,500 days of my lifetime, I must have had many more I just don’t recall. I can’t make up for a lost time, but I can and will start paying better attention.

Please tell me about your perfect (or near-perfect, or even just-pretty-damn-good) moments. I’d love to hear them. I think that by sharing them, we can spread a little more joy and prime ourselves to find more of them.

It’s about 4 pm now, and I have probably 6-8 more hours of this fabulous day left to me. I wonder what’s next!