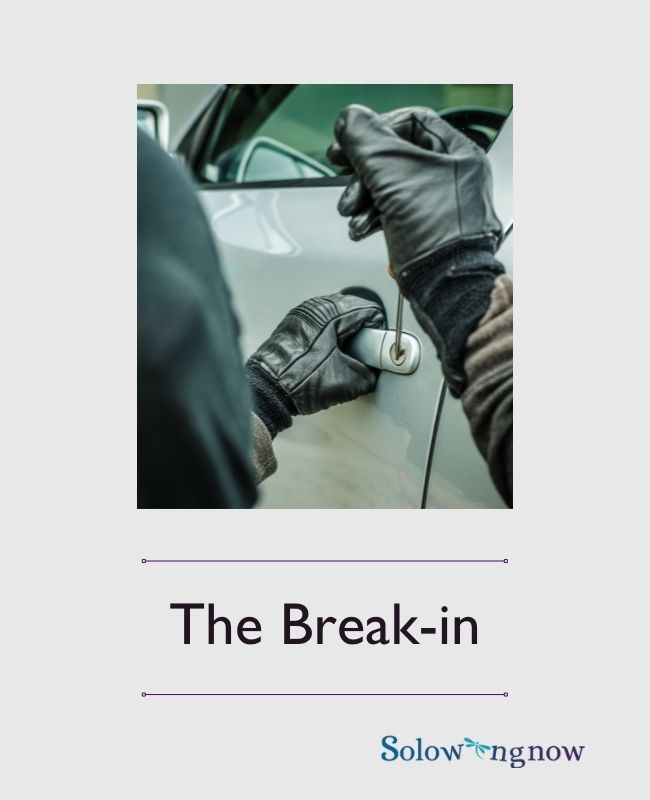 I was headed out to have lunch with a friend, my arms holding a purse, a bag of her things I was returning to her, and some library books that needed to be returned. The car was in the driveway, where it had been parked overnight. I opened the front passenger door and immediately saw some candy on the front seat. It was mine, and it had been in the center console. Which had been closed but was now open. I looked over to the driver’s side and noticed that my Owner’s Manual to the car, which had also been in the console, was out on the seat. Needless to say, I was late for lunch. I wasn’t exactly rattled, and I wasn’t even scared.  I was pi**ed off, and mad at myself because I figured it was maybe my own fault. Luckily, no damage to the car, but there was still a trespass if not a full break-in…

The first question the officer asked me was if my car had been locked. I didn’t know. I usually lock it, but I have the kind of key fob that opens the door automatically when you are near it, and I just don’t recall if I heard the beep or not. It’s possible the car was unlocked.  What was missing?  My iPhone 5 that I only use because it has my music on it, and its charging cord. I have a new Samsung phone now that was in the house with me. The charging cord for that was in the car but it was not taken. I had a TomTom GPS in the car, and it wasn’t taken. CDs, still there.  A few dollars in change, still there.  Coats, umbrellas, blankets, maps, still there.

This has never happened to me before – a break-in, or theft. It turned out that about 20 homes in the area reported thefts from vehicles that same day. Including the people directly across the street from me. He had locked his truck and left his wallet and several other things in his cab. They only took the gear from the back end under his locked topper. Which was later found in the trees a half-block away. Someone else’s TomTom was found – I guess that’s why they didn’t need mine!  My phone is still missing.

Anyway, I felt better that I wasn’t singled out or targeted for this. Still, the first person I wanted to call was Kevin. He couldn’t have prevented it, he couldn’t have fixed it, he couldn’t have done anything…but he would have listened to me blow off steam. I miss that. And I know it’s one way I have of maintaining my balance, so I did had to tell someone. Luckily I had that lunch date set up, so Debra was my relief valve.

This incident reminded me, too, of other times I had to fly solo, even when I was married. I had a car accident once in New Mexico, and I was by myself. I fell out of the garage attic once in South Dakota (the ladder fell, leaving me no choice), and I was by myself.  I tripped on the deck stairs here and landed on my arse, and I was by myself. After I got off the phone with the police, I remembered these other times and that I had handled them by myself and adequately if not well. It made me feel competent, even if I had forgotten to lock the car. (Oddly, not much has happened when I haven’t been married…so I guess that’s something to think about!)

When I think about living alone these days, I haven’t been scared or felt vulnerable or insecure, even when traveling by myself.  In fact, I feel strong, smart, and capable.  Yet, since I don’t have Kevin to protect me or beat up my tormentors for me, I had recently taken a self-defense course. I just wish I had seen or heard my thief so I could have had a chance to try out a few of my new moves while they were still fresh on my mind. I’m pretty sure I could have made him/her wish they had not chosen me to mess with. “Not here, not now, not you.” Kick, jab, shove, run.  But for all that bravado, I really hope I never have to use those skills. And now you can hear every car up and down the street beep-beeping as they get locked when we turn in.

If you find an iPhone with a pink and teal rubber protector case, it’s mine. I’d like it back. I just downloaded the new Blake Shelton CD….