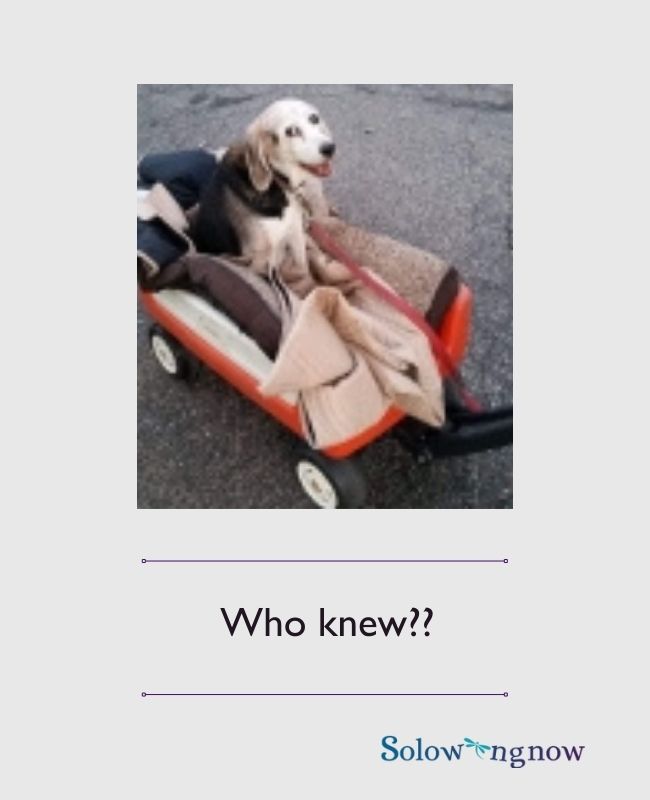 Buddy wasn’t the first dog to live with me/my family, but I loved him best if I’m honest. The others- four of them in the past 40 years- were apparently starter pups for my benefit, and now I know how I failed them. I just didn’t get it then, how to give them love, how to let them be good at what they were, how to accept what they offered me. Caring for a pet was not in my upbringing, and those I knew who did have dogs all had outside “working” (read: farm) dogs. I had no idea that a dog could be love.

Actually, I didn’t want another dog at first, and certainly not a house dog. But Kevin thought I really needed something to love and nurture after my youngest son left for college. I stood firmly against it. Not in my house. Those tails would slap my plants, jingle my china, knock things off the table; there would be drool and dog hair everywhere, not to mention the smell.  Even tiny dogs would bark and yip and squeal. No thank you very much.

And then there was Buddy. Have you ever seen a beagle puppy? Held one? Those chocolate drop eyes, the silky long ears, the white-tipped happy tail.  It’s enough to make you believe in love at first sight. I kid you not.  This little thing scampered across the floor into my lap, crawled under my sweatshirt like he knew exactly what to do and had every right to do so, and stuck his head out at my neckline to give my face puppy kisses. What could I do? What would you do?? Yes, I took him home. Even after he peed on me in his excitement. And barfed on me in his anxiousness about being put in a box for the car ride.

I was still adamant, though, he would sleep in a kennel in the laundry room. That edict lasted for about an hour after we went to bed. The noise from down the hall,  down the stairs to the basement, and behind a closed door was relentless. I have no idea how such a little thing could make so much noise. And it wasn’t even a bark; it was that baying sound hounds make, the kind that makes you smile and listen instead of wincing and shouting back to be quiet.  So for “just this first night, until he’s used to the crate” he slept with us in bed. Uh-huh! You know how that story ends. The queen bed was traded for a king-sized one, and white noise was tried to drown out the snoring. Dogs snore?!? Oh, the things you learn!! The silence is deafening now, and the bed is too big, just in case you are wondering.

But I didn’t spend all my money on doctors. There were also cute coats and booties and hoodies. Leashes he couldn’t chew through (don’t believe that one). Doggie seat belts.  Special shampoo and conditioner, and flea and tick ointments.  Cute water bowls and food dishes. Cute treat jars and puppy-themed photo frames. Replacements for the not-so-cute holes in gloves, wallets, shoes, pillows.  Torn underwear (that was paraded around the house and sometimes outside if he was faster than we were). Lint rollers (for dog hair) in every drawer in every room, plus in the car and desk at the office. Trash cans with lids, trash cans with magic self-closing lids, trash cans behind closed doors. Pupcakes on birthdays. Tie-out chains, gates, crates, and fences. Extra fees at hotels. Kiddie cups of ice cream at DQ. Plain burgers at McD’s or hot dogs at Sonic. Photos with Santa (yes, really). A dog stroller when it was too far for him to walk.

Buddy turned 13 this past January.  We had a great trip back to Minnesota in May. But by June he was in so much pain, I could no longer deny him release as I watched the decline in his health happen quickly over a single weekend. On Monday, June 19, I took him to the veterinarian and had him euthanized. It was one of the most difficult decisions I have ever had to make – and I’ve made a lot of hard decisions, trust me. So difficult I still can hardly talk about it 2+ weeks later.  I know I did the right thing, but it hurts so bad. I still have his brother Bo (now 11), and I love Bo, but Buddy …there was just something about him.

He was the definition of pure love. He was everything a pet should be: a little crazy, a lot happy, satisfied, fearless, loving, forgiving, hungry, curious, persistent, vocal, observant, friendly. As my brother said, Buddy didn’t know he was a dog; he thought he was a boy. Bo knows he’s a dog, and he’s very good at it. I’m thankful he is here to help me through this next corner I’m having to turn.

If you have lessons to learn in this lifetime about unconditional acceptance, forgiveness, just-for-today thinking, happiness in little things, listening, joy, togetherness, selflessness, then I’d recommend a dog like my Buddy. Or group therapy, but I’d start with a dog.  Buddy was my best teacher…so far, although he undoubtedly got a lot of help (which I needed) from his human (now spirit) daddy. The grief when they are gone is red hot, but everything before that is spectacular raspberry fizz with whipped cream and a cherry on top!

(PS:  See-I told you! Buddy is on the left, and Bo is on the right. Who knew Santa wasn’t only a lover of reindeer???)