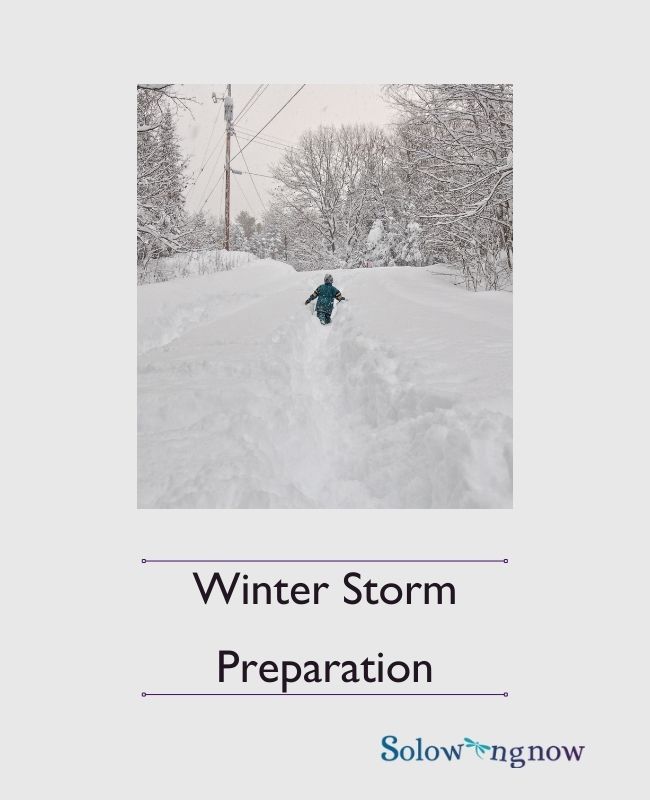 I have lived through some memorable storms, so this one isn’t making me nervous. There was the January 1975 blizzard in Minnesota when I was babysitting and got stuck at this house with some wild kids for about 4 days. I was only a junior in high school but managed okay.  Another time my boys and I ended up stranded at a Salvation Army overnight when a storm hit while we were on our way home from my mom’s house.  The driving part was scary, but we managed okay.  Then there was a storm in Pierre when Kevin was still living in Brookings.  I ended up with a snowdrift as hard as a brick wall and waist-high I had to chop down to get out of my driveway.  I’ve also lived through a “flizzard” that resulted in my house being flooded with 51″ of water.

In each event, I had to figure out my survival strategy and implement it without the benefit of a father/boyfriend/husband, and even without a parent/friend/sibling to help make the major decisions or do some of the heavy liftings.  I would probably rather have had that, but it’s a moot point.

It’s kind of funny.  In Virginia, there have been two hurricane threats since I’ve been here – both of which luckily turned out to be non-events. But for the first one, Kevin was in Minnesota retrieving his boat, and last year he was already gone.

I’m destined to face these adversities with Mother Nature on my own, I guess.   And as a practical woman of Midwestern stock, I am quite capable and self-sufficient, thank you.  I have water on hand, candles and matches, extra batteries, bread and peanut butter, and extra toilet paper.  I have blankets and dogs and a gas stove to keep me warm.  I have books to read, other books to color in.  I even have a portable DVD player.  Computers and phone will be charged up, along with back-up batteries.

I am thankful I am not dependent or helpless, and I’m not scared, but this is the kind of time when I do get lonely.  A good old-fashioned snow storm begs for snuggling before a fireplace, drinking hot chocolate, playing Scrabble or Dominoes, and making memories to be shared later.  The me-and-you-against-the-world thing….